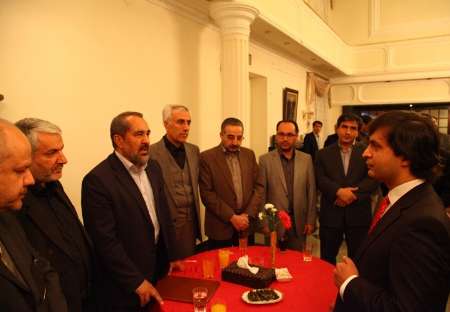 Urmiyeh, W Azarbaijan Prov, Oct 30, IRNA – A senior provincial official here on Wednesday referred to bilateral plans of Iran and Turkey targeted for the expansion of trade exchanges up to $30 billion and expressed the hope that with the preparation of grounds the target will be realized soon.

Alireza Raadfar, Political and Security Deputy of West Azarbaijan Governor General, in a meeting with Turkish Consul General in Urmiyeh pointed to historical and cultural roots of relations between the two friendly and neighbor countries and expressed the hope for further expansion of mutual ties.

Congratulating Mehmet Bulut on the occasion of the ninety-first anniversary of establishment of the Turkish Republic, he hoped for the removal of prevalent problems and underlined the effective role of border terminals in reaching bilateral economic targets.

“We are prepared to bring the borders back to their previous situation through cooperation with Turkey,” he said.

He expressed the hope that the prevailing difficulties will be solved in the forthcoming visit of the Turkish foreign minister to Iran.

West Azarbaijan is the only Iranian province which borders Turkey.