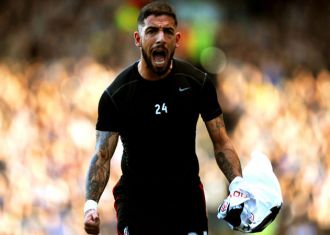 Dejagah proud to play for Iran

TEHRAN (Tasnim) – Iran football midfielder Ashkan Dejagah said that he loves Iran and is proud to play for Team Melli.

Below are excerpts of his interview with the AFC magazine:

“It was a big thing for me, to decide to play for Iran,” said the former Germany youth team player.

“I spoke to my family, and for them it was always about what I wanted in my heart. This is what you have to do.

“In my heart I was born in Iran, I have a lot of family there and my parents are Iranian, my wife is also Iranian so why not Iran? I love Iran and I’m proud to be Iranian.”

“I saw the last Asian Cup on the TV and the World Cup in France and in Germany,” he says.

“I was always watching Iran because I have Iranian friends in Germany so we always tried to watch the Iranian games.

“There were a lot of good players who played in Germany, like Ali Daei, Khodadad Azizi, Karim Bagheri. All these players played in Germany when I was a kid, but my favorite player was Ali Karimi, because he was – and he still is – an amazing player for me. It was really nice because I played my first two or three games for the national team together with him and he helped me a lot in the games. For me, Ali Karimi is still a big player.

“I knew Mehdi Mahdavikia. I played a couple of times against him and also Vahid Hashemian and I think in 1998 in France they had a great team and big players, and after the World Cup in France, the German teams took them. There were so many at that time. People also forget Daei, Karimi and Hashemian played for Bayern Munich, one of the biggest clubs in the world.”

His debut came against Qatar in qualifying for the 2014 FIFA World Cup in February 2012, and before long, he was exposed to the incomparable atmosphere of Tehran’s Azadi Stadium.

“Even for me, I have played a lot in big stadiums, but my first time in Iran it was crazy,” he says.

“I was shocked when I came out and I saw the people. It was amazing. I really enjoy every time I play in Tehran.

“I’ll never forget the game against South Korea when we played at home in the qualification, we had a red card. There were 100,000 in the stadium and we scored for 1-0 and I thought the stadium is going to break! It was crazy.

“I always enjoying playing in Tehran and hopefully we can give the people something back for the support they always give us.”

“I think it was a great time for me, because it was the first World Cup of my career,” says Dejagah of his summer in South America.

“I think we did quite well in Brazil with Iran, also the game against Argentina was a big game for the country and we did well. We took just one point but I think all of the players did well there and we were a little bit of a surprise for the other teams.

“After the Argentina game I was shocked. We played so well against Argentina and it was hard after the game to accept this 1-0 for Argentina, but I think we showed to the whole world that we can play against big teams,” he added.