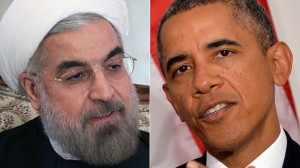 Why Obama rejected peace with Iran

How did Obama manage to botch U.S. foreign policy so stunningly? The promising speeches he gave in 2008 earned him the Nobel Peace Prize. But his inspiring words have since been buried in the rubble of Libya, Palestine, Iraq, and Syria. The region that once viewed Obama as a peace messiah now rejects him as a warmonger. And with every new foreign policy zigzag Obama only finds fresh “threats” while never managing to find the path to peace.

Obama would like peace in theory, but doing so requires he shake up his Middle East alliances. The U.S. stands pigeonholed in tightly-wound alliances with the most hated regimes in the world, sandwiched between the global pariah Israel and the brutal totalitarian dictatorship of Saudi Arabia. The other important U.S. ally is war-hungry expansionist Turkey, while the smaller U.S. allies are the remaining Gulf state East alliances by using the Kurds. No nation with a sizable Kurdish population — Iran, Turkey, Iraq, Syria — will buy in to a possible U.S. policy of Kurdish statehood, since they would lose the oil-rich territory that the Kurds live on.

Not only would the U.S. lose regional allies by advocating Kurdish independence, but if such a state were to emerge, it would be a weak nation, since the Kurds are already divided into various factions, and thus not strong enough for the U.S. to rely on to achieve regional objectives.

Consequently, Obama feels compelled to continue down the same war-torn path as his predecessors. But Obama’s perspective is colored by his assumption that the United States must remain the regional power in an area thousands of miles from its border, and that U.S. corporations should dominate the oil, banking, weapons selling, and other markets in the region.

The U.S. is long past the point where it can claim that its Middle East goals are “peace, stability, and democracy,” especially after invading and destroying Afghanistan, Iraq, Libya, and now the dirty war against Syria.  The oil, minerals, and other wealth that attracts the U.S. corporations that steer U.S. foreign policy prevent any real lasting peace to be achieved. The logic of corporate America is to crush the competitor by any means necessary.

Peace with Iran and Syria could be achieved if Obama told the world the truth about the above dynamics in the region, and treated Iran and Syria with the respect that an independent nation deserves, while working to curb the power of Israel and Saudi Arabia, who both depend on U.S. financial, military, and political support.

But instead Obama has dug in his heels and re-enforced alliances that demand the continuation of the Syrian war, and after that Iran. A war-shredded region remains on the bloody path to a potentially even wider war, while the billions of U.S. tax dollars funding this genocide will remain unusable for domestic projects like job creation and climate change reduction and preparedness. During this election season both Democrats and Republicans agree on continuing Middle East war.
This article was written by Shamus Cooke for Global Research on OCT. 25, 2014. Shamus Cooke is a social service worker, trade unionist, and writer for Workers Action (www.workerscompass.org).