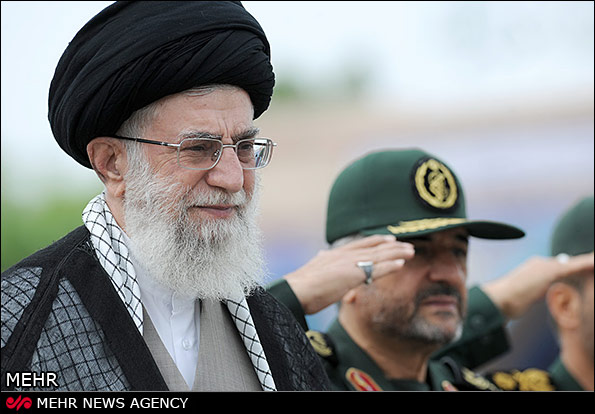 (Reuters) – Iranian Supreme Leader Ayatollah Ali Khamenei blamed Western powers on Tuesday for the rise of Islamic State (IS) insurgents in Iraq and Syria and said they had no business tampering with the region’s geopolitics.

Iran and the United States have been arch-foes for decades but now share a strategic interest in reversing the territorial gains of IS that threaten to remake the Middle East map.

But cooperation has been blocked in part by the fact Tehran and Washington back opposing sides in Syria’s civil war, where Islamic State is among rebel forces fighting President Bashar al-Assad. While Washington opposes Assad, it sees IS as a bigger threat and is staging air strikes to try to neutralize the al Qaeda offshoot with the support of Western and Gulf Arab allies.

“(The) current imbroglio is the outcome of irresponsible acts inSyria by alien powers along with certain regional countries,” Khamenei said, according to a statement read on state television, an allusion to mainly Turkey and Saudi Arabia,

He praised Iraq for “refusing to allow its soil to be used” against Assad, which Tehran has shored up against rebels bent on toppling him with the support of Western and Gulf Arab foes.

“We must firmly withstand them,” Khamenei said, referring to those arrayed against Assad. “(I have) no faith in the sincerity of the (U.S.-led) coalition against Islamic State. We believe the problem of Islamic State and terrorism should be tackled by regional countries.”

Last month, Khamenei said he had personally rejected an offer from the United States for talks to fight Islamic State.

Khamenei spoke on Tuesday while receiving new Iraqi Prime Minister Haider al-Abadi at his residence. Iran is the region’s Shi’ite Muslim big power and backs Iraq’s Shi’ite-led government, while Islamic State are ultra-hardline Sunni Muslims who demand that all non-Sunnis convert or die.

Khamenei promised to “spare no effort to uphold Iraq’s security and territorial integrity … The complex situation of the region makes security of its countries inseparable. Security of brotherly, neighborly Iraq is as indispensable as our own.”

Separately on Tuesday, Iranian President Hassan Rouhani was quoted by state media as assuring Abadi in a meeting that Tehran “will continue to support Baghdad by providing military advisers and weapons to the government”.

Rouhani also called for greater regional cooperation to fight Islamic State. “Terrorism and extremism should be confronted in a united and coordinated way … This is the only way to uproot this phenomenon,” Rouhani said.

Iran, which fought a war with Iraq in the 1980s when it was under the rule of Sunni dictator Saddam Hussein, has since June been sending weapons to Kurdish forces in northern Iraq and military advisers to help the Iraqi army against Islamic State.

IS forces rang alarm bells across the Middle East in June when they swept across northern Iraq, seizing cities, slaughtering prisoners and proclaiming a caliphate to rule over all Muslims.

As well as conducting air strikes on Islamic State in Iraq and Syria, the United State is seeking to strengthen the Iraqi government so it can resist jihadist forces more effectively.

But despite some military successes in the Syrian town of Kobani on Turkey’s border, where air strikes have helped check Islamic State, the U.S.-led air raids have done little to stop the armed group advancing in other parts of Iraq and Syria.