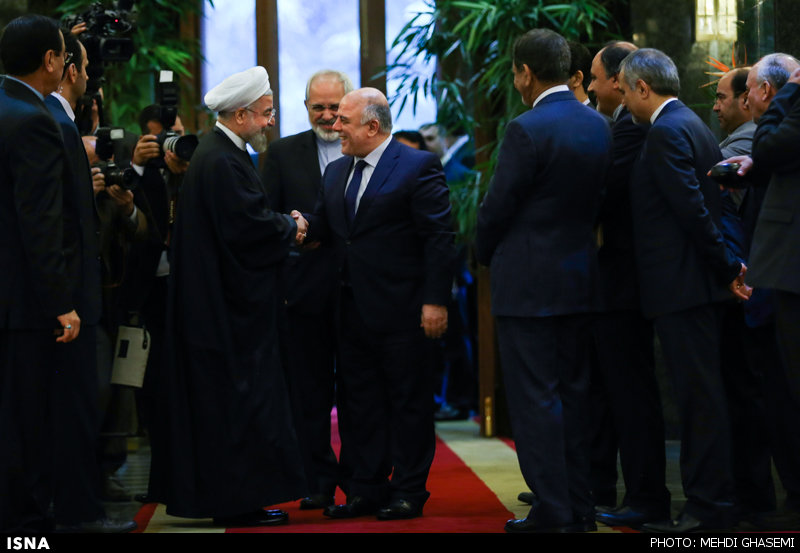 Iran continues its high-profile regional diplomacy on Tuesday with the visit of Iraqi Prime Minister Haidar al-Abadi to Tehran.

The Islamic Republic has pursued initiatives in the past week, including military aid, by hosting the Lebanese Defense Minister and the head of Gaza’s Islamic Jihad (see Iran Dailies on Sunday and Monday). However, the most pressing crises may be in neighboring Iraq, with the advance of the Islamic State and US intervention, and in Syria with the continuing challenge to Tehran’s ally President Assad.

Iranian military personnel have been in Iraq — despite the official denials of Tehran — since the Islamic State’s advance in the north, east, and west of the country in June. The head of the elite Qods Forces, Qassem Soleimani, has been prominent in his political and military advice to Iraqi leaders.

Al-Abadi, who took office on September 8 after the fall of long-time Prime Minister Nuri al-Maliki, was received at Mehrabad Airport on Monday night by Deputy Foreign Minister Hossein Amir-Abdollahian.

The visit is the Prime Minister’s first to Iran, but he met President Rouhani in late September at the United Nations in New York.

On the Syrian front, Tehran hosted the UN envoy Steffan da Mistura for talks with officials including Deputy Foreign Minister Abdollahian and the Secretary of the National Securty Council, Ali Shamkhani.

Abdollahian repeated Iran’s denunciation of “safe havens” in northern Syria from the Mediterranean to the Iraq border. He said of the Turkish proposal: “The creation of a buffer zone in Syria would be a violation of the country’s sovereignty and further complicate the situation.”

Shamkhani declared, “In spite of the Syrian government’s readiness to hold political dialogue with different Syrian groups, irresponsible behavior of certain Western and regional countries as well as arming the opponents and provoking them to kill the people has been the main obstacle to the establishment of calm in Syria.”

And Iran persisted in its campaign for Lebanon’s acceptance of military aid, countering a $1 billion grant by Saudi Arabia. As the visit of Lebanese Defense Minister Samir Moqbel continued, his Iranian counterpart Hossein Dehghan said:

We assume military equipment and enhancement of Lebanon’s power against the Takfiri-Zionist streams and the Islamic State as a responsibility….

What we are supplying to the Lebanese army is a rapid reaction in response to a possible threat. And we are ready repeat this aid in future to equip Lebanon against the ISIL and terrorist streams.

Lebanese acceptance of the aid has been held up by divisions within the Cabinet and pressure from the US and Saudi Arabia.

Head of Assembly of Experts Dies — Will Political Battle Follow?

Ayatollah Mahdavi Kani, the head of the Assembly of Experts, has died after four months in a coma.

Mahdavi Kani, who led the Assembly since 2011, suffered a heart attack in June.

The Ayatollah’s condition spurred a political battle, with former President Hashemi Rafsanjani — who headed the Assembly from 2007 to 2011 — considering a campaign to replace him. To prevent the move, Rafsanjani’s opponents delayed the Assembly election in September and put Ayatollah Shahroudi in as interim head of the Assembly.

The Assembly of Experts has the responsibility of confirming the Supreme Leader and nominally can remove him.