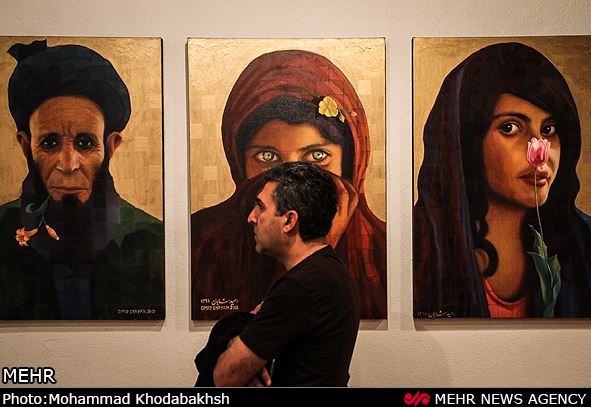 Art for Humanity exhibition is open to the public. All proceeds from the exhibition will be contributed to the work of WFP in Iran

Across the world, one person in nine goes to sleep hungry every night.
It is true that according to The State of Food Insecurity in the World 2014 Report, the total number of hungry people in the world is down by 37 million, to 805 million.

It is also true that a total of 63 countries have reached international hunger-reduction targets before 2015.  This is proof of the progress which is possible when governments, humanitarian organizations and the private sector come together to make lasting change.
Nonetheless, much remains to be done if we are to ensure that the world’s food – of which enough is produced to feed everyone, if it were equitably distributed – is better managed.

Every year, on 16 October, people across the world commemorate World Food Day

As part of this awareness-raising, every year, on 16 October, people across the world commemorate World Food Day.  The UN’s two main “food security” agencies – World Food Programme (WFP) and Food and Agriculture Organization (FAO) – normally use this occasion to draw attention to the problem of food insecurity. This year, in Tehran, both agencies commemorated World Food Day, whose theme was Family Farming: Feeding the world, caring for the Earth. (For FAO Iran’s event see: http://bit.ly/1vdUlXg

In an innovative effort to raise funds, WFP Iran organized an art exhibition entitled Art for Humanity which was inaugurated on 17 October at Niavaran Cultural House and will run till 24 October.
Present at the launch were: Deputy Minister for Culture and Islamic Guidance, Mr. Ali Moradkhani; Head of Niavaran Cultural House, Mr. Abbas Sajjadi; ambassadors, artists, media as well as members of the UN team including WFP Representative, Ms. Negar Gerami and UN Resident Coordinator in Iran, Mr. Gary Lewis.
In his opening remarks, Mr. Sajjadi quoted the poet Sa’adi’s well-known verse: “Human beings are members of a whole.  In creation of one essence and soul.  If one member is afflicted with pain.  Other members uneasy will remain.  If you have no sympathy for human pain.  The name of human you cannot retain”.  He continued by commending WFP for putting together such a valuable collection of artwork and expressed the hope that humanity would – one day – celebrate the end of hunger at the Niavaran Cultural Center.”

WFP Advisor, Ms. Shokoufeh Malekiani also spoke at the event.  “I am proud of this movement.  I started this project with 32 artists and this year this number has increased to 100.  This shows the level of commitment of the artists to our cause – eradicating hunger.”

Speaking next, Mr. Gary Lewis said: “Hunger is the world’s biggest solvable problem.  Iran has made great advances in recent decades in reducing the number of people living in extreme poverty and hunger – which is the objective of Millennium development Goal number 1.  But there are still people with whom we are working with the Government to support – especially vulnerable camp-based refugees from Afghanistan and Iraq.”  Mr. Lewis expressed heartfelt appreciation for the over 100 individuals – some Iranian masters, some emerging artists – who donated their “labours of love” to raise funds to help people have healthy, nutritious food in order to lead active lives.

Prior to inaugurating the exhibition Ms. Negar Gerami highlighted the importance of art and humanitarianism in Iranian culture.  She said: “When we were choosing a name for the collection that is being exhibited today the only name that came to mind was Art for Humanity, as we believe humanitarianism is an art and we Iranians are masters of this art.  Special thanks goes to the artist many of whom are present here today, without whom this endeavor would not have been possible, who donated their works to us with one aim- to end global hunger.”

Ms. Gerami thanked the Niavaran Cultural center for its contribution and support.  And she thanked Ms. Malekianni who had worked tirelessly for an entire year to collect these pieces and the small WFP team of 15 who had gone the extra mile and working well beyond the call of duty to make the event happen.

The exhibition is open to the public.  All proceeds from the exhibition will be contributed to the work of WFP in Iran.