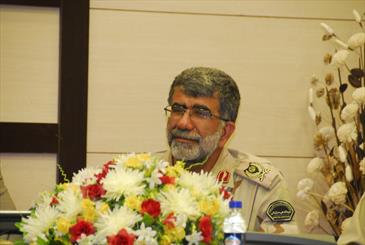 Islamic Revolution Guard Corps (IRGC) Brigadier General Roham-Bakhsh Habibi said that the Zahedan Border Guards Brigades who had gained information on movements of the armed hooligans at the zero point of Iran-Pakistan borders and their intention to enter the Iranian soil reacted promptly to their illegal entry attempt.

‘That brigade managed to halt the procession of the armed bandits in a highly skilled operation,’ said General Habibi, adding that in the course of that operation a number of the bandits got killed and one of their vehicles and a noticeable amount of arms and munitions were confiscated.

The regional border guards’ commander appreciated their bravery in safeguarding the country’s borders effectively and in blocking the path for their illegal entry into the country, expressing sorrow that two of them got killed in the operation.

Brigadier General Habibi warned the bandits, hooligans, terrorists and extremists that efforts aimed at entering the sacred soil of the Islamic Republic of Iran would cost them dearly as the brave Iranian border guards are ready to safeguard it to the last drop of their blood, quite mightily.