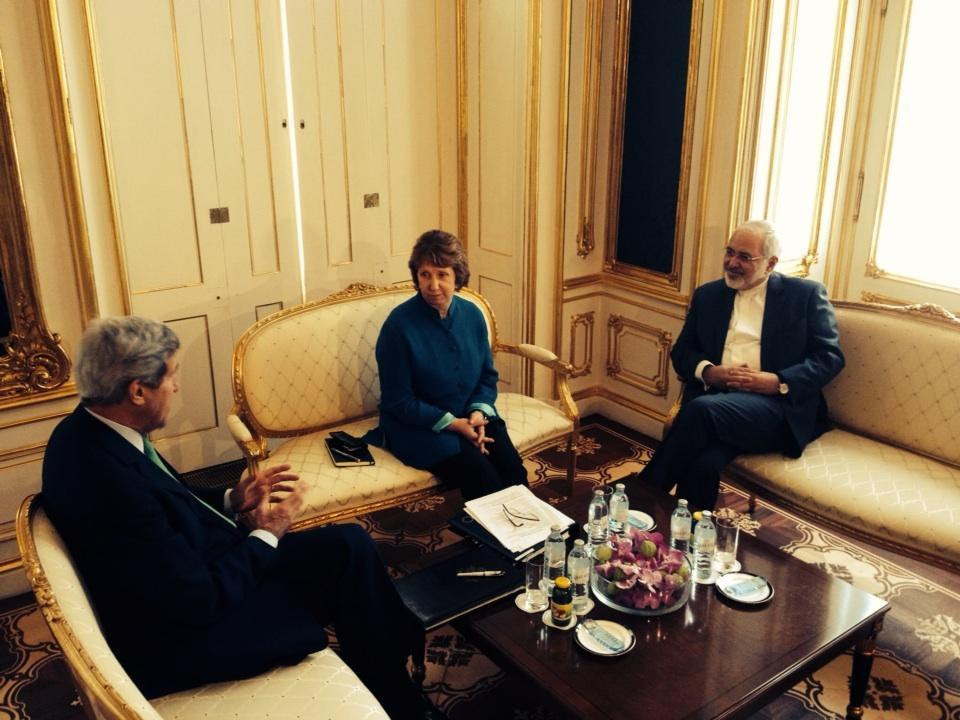 Iran’s Foreign Minister Mohammad Javad Zarif, US Secretary of State John Kerry, and the European Union’s foreign policy chief Catherine Ashton met on Wednesday in Vienna, seeking to close “significant gaps” in the nuclear talks between Tehran and the 5+1 Powers.

No details were given on Wednesday night’s meeting. Key issues of difference include the number and level of Iran’s centrifuges for uranium enrichment, the timetable for lifting US-led sanctions, and the duration of a comprehensive agreement.

Talks will continue between senior Iranian, US, and European officials on Thursday.

The two sides are seeking a resolution before the expiry of interim arrangements on November 24. However, Iranian officials, including President Rouhani, have indicated that they may seek another extension — following one agreed in July — of the interim agreement.

Lebanon Delays Acceptance of Iranian Military Aid Amid US Pressure

Tehran announced in late September that was providing the assistance to Beirut, following a Saudi grant of $1 billion in military aid in August.

Salam is said to be stalling to prevent any crisis between the Government’s two main factions, Hezbollah and the al-Mustaqbal Movement, as the US presses for a postponement.

Lebanese sources said Washington did not demand a rejection, but asked the Cabinet “not to swiftly accept the Iranian grant until all other arming pledges are met”.

Former President Mohammad Khatami, meeting people on the occasion of Eid al-Ghadir, has said, “It would have been good if today we had witnessed the freedom of Mir Hussain Mousavi, Mahdi Karrubi and Zahra Rahnavard,” the opposition leaders held under strict house arrest since February 2011.

Khatami added, “Even though I believe it is getting too late yet I should say that it is never too late to do something good.”

Earlier this month Motahari sent an open letter to Rouhani, reminding the President of his campaign promise to release the leaders who have been under strict house arrest since February 2011. He threatened to summon Rouhani to Parliament for an explanation if no action was taken.

Sane’i wrote that Mousavi and Karroubi — both candidates in the disputed 2009 Presidential election — and Mousavi’s wife Rahnavard, a leading activist, artist, and academic, should be supported as “innocents who have defended less oppressed people” and “close companions of Imam Khomeini”.

A conference of Karroubi’s Etemade Melli Party, attended by leading reformists, reinforced the message on Tuesday.

Iranian authorities have rejected the application of prominent lawyer Mohammad Saleh Nikbakht to represent Jason Rezaian, the Washington Post correspondent in Tehran who has been imprisoned since July 22.

Nikbakht said he had asked for permission to represent Rezaian a few weeks ago, but the request was turned down because the journalist’s detention has been classified as a “security case”.

The lawyer said he has no knowledge about any specific charges, or whether the interrogations of Rezaian are complete or ongoing.

Iranian Foreign Minister Javad Zarif assured US media, during his stay in New York in September, “[Rezaian’s] lawyers know [his charge]. He knows his charge.”

Rezaian’s wife Yeganeh Salehi, the Tehran correspondent of The National, was detained at the same time as her husband but was released on bail earlier this month.

It was finally confirmed that the charge against Ghavami — seized in June for trying to attend a men’s volleyball game — was “propaganda against the regime”. A verdict will be issued next week.

Speaker of Parliament Ali Larijani, challenged by CNN this week, insisted, “There should be no doubt that we don’t want to send anybody to jail with no good reason.”