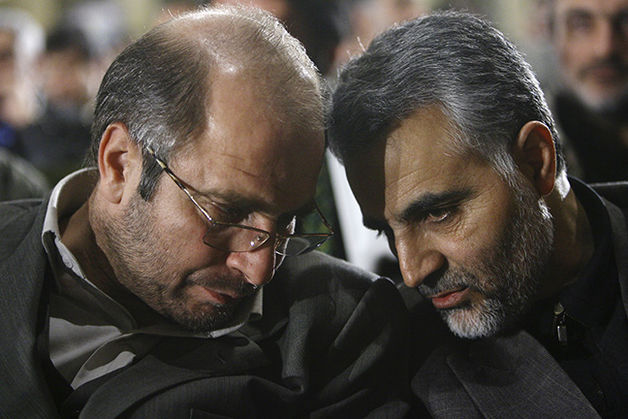 Iran’s message to world: You need us to fight Islamists

Suleimani, seen here, right, in 2006, who served in the 1980-1988 war against Iraq while in the Revolutionary Guards, was appointed as Quds Force commander in 1997.

In the fight against Islamic extremists, the commander of Iran’s secretive special forces is turning into an unlikely celebrity.

Iranian television published last week a picture of Quds Force Major General Qassem Suleimani on an Iraqi battlefield surrounded by Kurdish Peshmerga fighters. That photograph, widely shared on Twitter and other social media, is the latest of Suleimani to appear since the fall of the city of Mosul to Islamic State. Even in the constrained Iranian media, Suleimani sightings, which once were rare, are now common.

The transformation of a man in the shadows as chief of covert foreign operations for the Revolutionary Guards into a public hero is central to Iran’s message to the world: If you want to beat Sunni militants, you need the help of the Shiite nation and its top military commander.

“He is sending a message to the U.S. about their influence,” said Antony Cordesman, a senior analyst at the Center for Strategic and International Studies, a research organization in Washington founded in 1962. “And there is a message to the Arabs that they too have to deal with Iran.”

Suleimani, 57, who served in the 1980-1988 war against Iraq while in the Revolutionary Guards, was appointed as Quds Force commander in 1997. He reports directly to Supreme Leader Ayatollah Ali Khamenei and is responsible for Iran’s covert activities in Afghanistan, Iraq, Lebanon, and Syria.

In pictures shared on Twitter, Suleimani, with silver hair and close cropped beard, is often seen smiling for the camera, like a tourist on vacation, unconcerned about the Kalashnikov AK-47s carried by those around him.

At home in Iran, where he comes from the southeastern Kerman province, he is credited by media with saving President Bashar al-Assad’s regime in Syria against the coalition of rebels as well as jihadists trying to bring it down since violence worsened in March 2011.

Iranian General Amir Ali Hajizadeh said on state television last month that Islamic State would have seized the Iraqi Kurdish capital of Erbil had it not been for Suleimani and 70 of his men intervening to defend the city.

“The current branding of Suleimani shows him to be a charismatic man of the people who is not afraid to go to the fronts and command the war efforts personally,” said Payam Mohseni, director of Iran Project at Harvard Kennedy School of Government. “Many Iranians may not have known who Qassem Suleimani was in the past but his popularity has been on the rise domestically since the PR campaign.”

As Islamic State, formerly known as Islamic State in Iraq and the Levant, or ISIL, tightens its grip on the Syrian Kurdish city of Kobani an editorial in the Iranian conservative news website Khabar Online asked Suleimani to help defend it. Kurds blame the U.S. and Turkey for dithering during the onslaught.

The U.S. excluded Iran from a multinational conference in Paris on Sept. 15 on countering the threat posed by Islamic State. Secretary of State John Kerry told a United Nations Security Council meeting four days later that “there is a role for nearly every country in the world to play, including Iran.”

As the largest Shiite nation, Iran has been a prominent power broker in Iraq since the U.S.-led invasion toppled Sunni leader Saddam Hussein. The country funded Shiite militias in Iraq to counter extremist Sunni militants.

“Iran is showing how seriously they are taking the threat to Iraq,” said Fawaz Gerges, a political scientist at the London School of Economics. “It says we are here to stay and have to be taken seriously in any fight against ISIL.”

The U.S. Treasury department designated Quds Force as a terrorist organization in 2007 for its support of Hezbollah in Lebanon and the Taliban in Afghanistan. It named Suleimani as a terrorist in 2011 for his role in human rights abuses in Syria.

The Obama administration in 2011 accused the Quds Force of plotting to assassinate Adel al-Jubeir, the Saudi ambassador to the U.S., and to blow up the Saudi Embassy in Washington.

“Once perceived as the mastermind behind terrorist attacks against the U.S. military in Iraq, Suleimani suddenly emerges as an ally in the struggle against ISIL,” said Ali Alfoneh, a senior fellow at the Foundation for Defense of Democracies who researches Iran’s Revolutionary Guards.

The public relations campaign hides “the fact that Suleimani and the regime in Tehran themselves in part were responsible for exclusion of the Sunnis in Iraqi politics that led to emergence of ISIL,” Alfoneh said.

Iran blames the U.S.’s foreign policy in the Middle East and the invasion of Iraq for the rise of extremist Islamic groups. Since Saddam’s ouster, Sunnis have accused Shiite-led governments in Iraq of alienating them.

It was in Iraq where the U.S. military came across Suleimani first as his Quds Force trained Shiite militia, according to Derek Harvey, a retired colonel who served in the country and was a senior analyst for General David Petraeus.

Now, the U.S. and Iran are cooperating, at least unofficially, in fighting Islamic militants in Iraq.

During almost a week of meetings in New York for the UN General Assembly, Iranian President Hassan Rouhani agreed with President Obama about the Islamic State threat. He also reminded his audience that Iran was the first nation to fight it.

“When Iran sends its top general from the Revolutionary Guards to help the Kurds and Iraqis, this speaks volume about convergence of interest,” said Gerges at the LSE. “In the Middle Eas teverything is interconnected.”