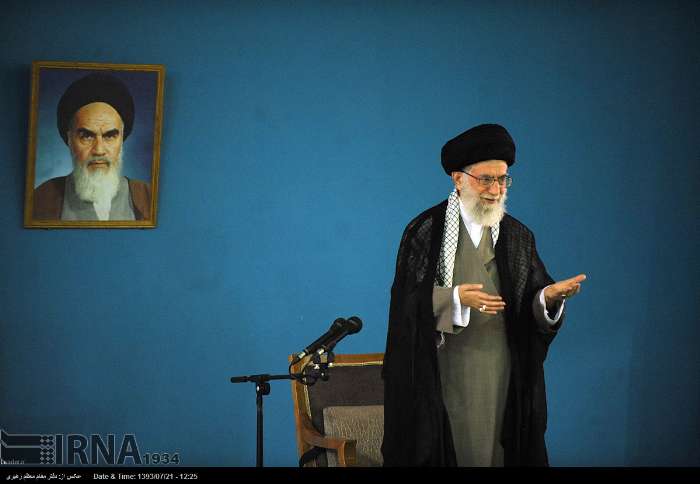 In an address to people from different walks of life on the occasion of Eid al-Qadir, Ayatollah Khamenei urged Muslims not to get involved in any move that would play into enemies’ hands.

“Shiites and Sunnis shouldn’t help the enemy by desecrating their sanctities and provoking one another’s sentiments,” the Leader underlined.

The enemies of Islam have always sought to drive a wedge between Shiites and Sunnis in order to deflect their attention from the real enemy, the Leader underlined.

“If anyone fuels the fire in this regard (the so-called fight against the ISIL), he or she will definitely be helping sinister America and Britain which are the creators of the ISIL and Al-Qaeda,” the Leader stressed.

Eid Al-Qadir commemorates the last sermon of Prophet Mohammed (PBUH), when he introduced Ali (PBUH) as his successor and Imam of Muslims.

Earlier this month, Ayatollah Khamenei slammed the West, specially the US, for creating the Takfiri terrorists, and said that the main objective of the ISIL is to create differences among Muslim sects.

“The Takfiri groups are spreading atrocities in the West Asian region in a bid to sow discord among Muslims,” the Supreme Leader said in a message to the Hajj pilgrims.

He noted that the enemy is pursuing to provide the Zionist regime with safety through igniting war among Muslims.

Ayatollah Khamenei reiterated that unity among Muslims, the issue of Palestine and making a clear-cut distinction between the notion of pure Islam of the Prophet Mohammad and the American-style Islam are among the most important issues facing the present Muslim world.

In July, the Supreme Leader Ayatollah called on Muslims across the world to set aside their differences, and use all their means to help the Palestinian people.