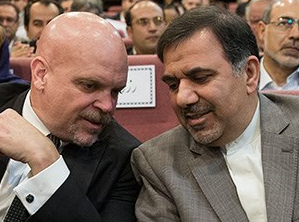 Slum dwellers: the focus of this year’s World Habitat Day

TEHRAN, 6 October 2014 — ‘Voices from the Slums’ is the theme for the World Habitat Day 2014, which was celebrated – in Tehran – through a joint event organized by the Iranian Ministry of Roads and Urban Development and UN Habitat.

In this ceremony, the Minister of Roads and Urban Development, Dr. Abbass Akhundi; the UN Resident Coordinator, Mr. Gary Lewis; heads of UN agencies and representatives of some foreign missions in Iran; senior Government officials and some informal settlements’ dwellers participated.

A number of UN heads of agencies and representatives of the foreign missions participated in the World Habitat Day 2014 commemoration ceremony. Photo Credit: Tasnim News Agency
In his opening remarks, Minister Akhundi highlighted the importance of addressing the challenges of the growing dwellers of the informal settlements, and called for stronger participation of all stakeholders in regenerating, rehabilitating and renovating urban areas. Recalling Article 123 of the Constitutional Law of the Islamic Republic of.Iran, which endorses the sustainable regeneration of such areas, Dr. Akhundi underlined the importance of the recently ratified document by the Government for urban revitalization, rehabilitation and renovation.

He hoped that through close collaboration and exchange of best practices with international partners – including the UN Habitat Office in Tehran, civil society and government institutions – the desperate circumstances facing the inhabitants of Iran’s informal settlements would be addressed. Read the full text of the Minister’s speech in Persian here. As part of the proceedings, the Minister unveiled the ‘National Policy Document on Sustainable Regeneration of Target Areas and Neighborhoods for Urban Revitalization, Rehabilitation and Renovation’

The UN Resident Coordinator, Mr. Gary Lewis was the next speaker.  He read out the message of UN Secretary General, Mr. Ban Ki-Moon on the occasion of the World Habitat Day 2014.

Mr. Lewis then spoke of the challenges affecting the citizens of Iran (70 per cent of whom were urban residents).  He pointed to future challenges coming from the impact of climate change and the ever-present peril of earthquakes and flooding.Underscoring that dwellers of informal settlements are subject to greater risks because of their vulnerability, he called upon all role-players to commit to improved planning and policy frameworks, and to continue the regularization of informal settlements.

In concluding, Mr. Lewis reassured the audience of the commitment of the United Nations for the work that needs to be done to improve human settlements.  This work, he noted, would be done by the UN Habitat Office in Tehran.
Mr. Siamak Moghadam, head of the UN Habitat Office in Tehran also read out the message by the UN Habitat Executive Director, Dr. Joan Clos on the occasion of the World Habitat Day 2014.
Every year, the first Monday of October is observed as the World Habitat Day. For more information, click here.
By United Nations In Iran