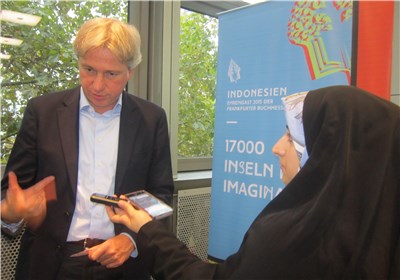 FRANKFURT (Tasnim) – Director of the Frankfurt International Book Fair lauded Iran’s literature and said there are opportunities for interactions with Iran.

Speaking to the Tasnim News Agency, Juergen Boos described Iran as a great country with very good literature and said there are opportunities for interactions.

Boos further referred to the problems facing Iranian publishers in Germany and said one of the problems pertains to the distribution of their works.

He added that in a meeting planned with Iranian officials in a few days, talks will be held for expansion of relations between Tehran and Frankfurt book fairs.

The 66th Frankfurt Book Fair was inaugurated on Tuesday, October 7 and will run until Sunday, October 12.

Organizers say they expect more than 300,000 visitors to browse the shelves and digital titles of 7,000 exhibitors from 100 countries.

A number of Iranian publishers and literary associations are also attending the fair.

Secretary of Tehran Publishers and Booksellers Association (TPBA) Mahmoud Amouzegar had previously said that nearly 200 titles in diverse sections would be exhibited in this year’s Frankfurt fair.