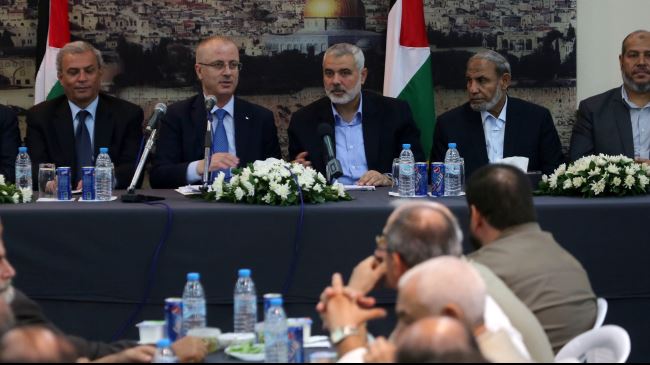 Senior Palestinian officials give a news conference after the first cabinet meeting of the unity government in Gaza on October 9, 2014.

Palestinian ministers have held their first cabinet meeting in the war-ravaged Gaza Strip since the formation of a national unity government in the occupied West Bank earlier this year.

On Thursday, Palestinian Prime Minister Rami Hamdallah met with his cabinet ministers in the Gaza Strip after he paid a visit to the areas worst hit by the Israeli regime’s 50-day military offensive against the blockaded coastal enclave.

“What we have seen today is dreadful and painful, and it has become clear to us that the rebuilding [of Gaza] is at the top of our list of priorities,” Hamdallah said.

He added that Palestinian factions have “put the years of division behind” them, saying the new unity government aims “to guarantee a return to normal life for Gazans and unity with the West Bank.”

In late April, resistance movement, Hamas, and the Palestine Liberation Organization (PLO), which includes Fatah, signed an agreement to end years of rivalry and form a unity government.

The new cabinet of the Palestinian unity government was sworn in on June 2.

At a news conference following the Thursday meeting in Gaza, senior Hamas leader, Ismail Haniyeh, also called on Palestinian factions to fulfill their promises under their reconciliation agreement.

“We emphasize the need for the success of reconciliation, in all its forms, and the need to work together for this government to succeed in its mission,” added the top Hamas figure.

Analysts say the Tel Aviv regime waged its latest brutal war on the besieged Gaza Strip in July in an attempt to scuttle the unity government. Over 2,130 Palestinians, including around 570 children, lost their lives and some 11,000 were injured in the raids.