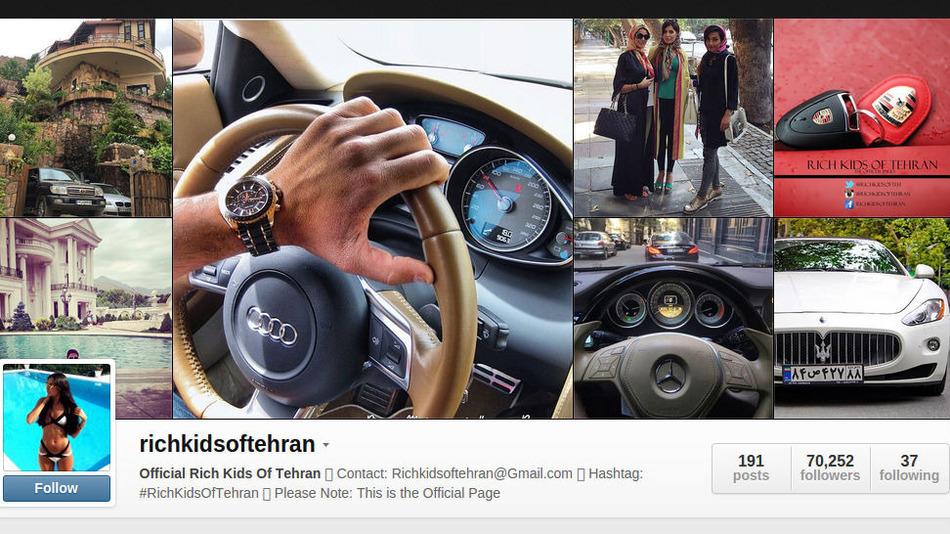 The controversial and viral Instagram account named “Rich Kids of Tehran” has been censored within Iran, according to several sources within the country.

The account, clearly inspired by “Rich Kids of Instagram,” collects pictures of what appears to be young and wealthy Iranians driving around in sports cars, wearing expensive watches or drinking fancy cocktails by big swimming pools.

The page also shows scantily-clad women drinking and not wearing hijabs — something that could be considered a crime in the country.

The page received widespread international media attention early this week. Now the Iranian government appears to have blocked it, according to several Twitter users and a news website tied to Iranian conservatives and hardliners.

The page contains “vulgar” images, which is why it was “filtered,” announced Weblognews.ir.

Since it was launched on Sept. 13, the account has amassed more than 70,000 followers. Following the media attention, its administrator posted a disclaimer Tuesday, explaining what the account is about.

“The Middle East is always on TV receiving negative attention and we just wanted to show that Tehran is not like that,” the disclaimer reads. “This page is in no way political and we never had any bad intentions. We never thought the page would make headlines all over the world.”

Some observers fear this Instagram account could actually put the people pictured in danger. Consider that this year, six young Iranians were arrested and later sentenced to prison time and 91 lashes for dancing to the tune of Pharrell’s “Happy,” in a video that went viral on YouTube.

“These pictures are not new to me. I can see this kind of photos in other Iranian Instagram accounts,” Nariman Gharib, an Iranian Internet researcher based in London, told Mashable. “But

it’s too risky to upload this kind of photos.

it’s too risky to upload this kind of photos.”

While Gharib said he’s not happy about the fact that the Instagram account got censored, “at least there is no news about them being prosecuted by the police.”

That might still happen, however. In the last few months, alongside the “Happy” arrests, Iran’s hardliners have imprisoned a women for attending a volleyball game, put a group of bloggersin prison for being “enemy cyber activists,” and arrested two people for making a video in support of Iran’s World Cup team.

The young women and men of “Rich Kids of Tehran” may be unclear — but as other observers point out, it helps that these may well be the sons and daughters of Iran’s political elite.

“Most of them have fathers who are untouchable,” Sara, an IT consultant in Tehran, told the London Times on Monday. “If they get in trouble, it will disappear.”

In Iran, at least, the evidence of that trouble has already disappeared from the Internet.

Have something to add to this story? Share it in the comments.