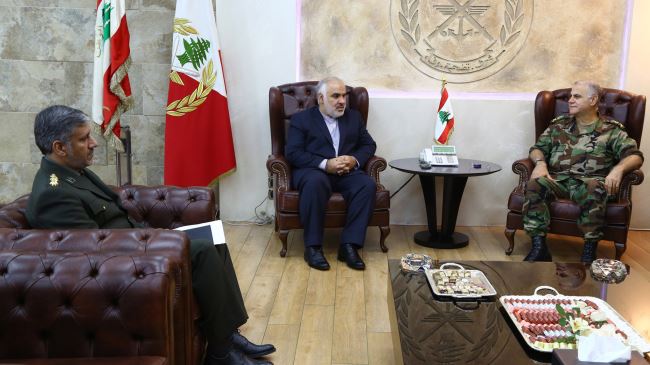 In a meeting with Iran’s Ambassador to Beirut Mohammad Fat’hali on Friday, the commander said the Lebanese army is ready to accept any military donation or assistance from friendly countries and use the military hardware to safeguard Lebanon’s territorial integrity and security.

He expressed hope that the upcoming visit by Iranian Defense Minister Brigadier General Hossein Dehqan to Lebanon would open a new chapter in military cooperation between Beirut and Tehran.

Fat’hali, for his part, described the establishment of regional security as the responsibility of all countries in the Middle East, stressing the need for supporting the Lebanese army against the challenges it is facing, particularly in the battle against Takfiri terrorist groups.

Fat’hali further noted that the so-called military coalition led by the US against ISIL militants is not serious in its campaign against Tafkiri terrorism.

“We (Iran) believe that regional countries should cooperate and work together in the fight against terrorism for this scourge to be purged from the region,” he pointed out.

On September 30, Secretary of Iran’s Supreme National Security Council (SNSC) Ali Shamkhani said in Beirut that Tehran is to provide military equipment to the Lebanese army for the fight against terror.

He added that the Islamic Republic has no red lines for providing military aid to Lebanon to help it in the fight against terror and consolidate stability and security of the country.

Syria has been gripped by deadly violence since 2011 with ISIL Takfiri terrorists currently controlling parts of it mostly in the east and north.