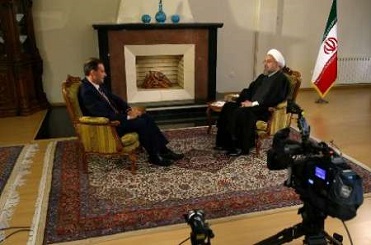 Responding to a question on Iran’s negotiations with P5+1 in New York in an interview with Russian Channel Two TV network last night President Rouhani told that “during these talks, certain forward steps, however small, have been taken, but we must make attempts to reach a comprehensive agreement in the remaining time, which we believe will benefit all and improve Iran’s conditions, particularly in trade.”

“The Islamic Republic of Iran is a member of the treaty on the Non-Proliferation of Nuclear Weapons (NPT) and has accepted all international regulations,” President Rouhani continued, “thus, negotiation can resolve any remaining small issues regarding Iran’s nuclear program.”

In regard to sanctions imposed by Washington against Moscow, President Rouhani responded “sanctions will benefit no one, and each country under sanctions must do its best to resist them and in doing so, receive aid from other countries.”

“Blind and arbitrary sanctions against countries must be halted,” President Rouhani continued, “if countries do not take a definitive stand against imposing sanctions, it will be used as an instrument to exert pressure on them.”

President Rouhani stressed the need for partnership between the neighboring countries in resisting sanctions and said “in the current circumstances, Iran will support the government and people of Russia. As soon as trade facilities are provided, Russian people will see Iranian brands in their markets.”

President Rouhani noted the importance of energy cooperation between Iran and Russia and said “the best approach is consultation, cooperation and healthy competition among gas-exporters so that the interests of all will be met. Iran has of the largest gas reserves in the world and its official policy is to provide gas for its own nation and to export it to neighboring countries.”

About  the US position in P5+1, President Rouhani stated “today, all involved countries in P5+1 are eager to settle the remaining issues and the only country that is proceeding a little slower than the rest is the US and we hope that the US will think twice about its long-term interests as well. We have already shown our absolute resolve in reaching an agreement and now it is the other side’s turn to take a braver stance so that an agreement is reached in the remaining time.”

On the summit of the Caspian littoral states’ Leaders, President Rouhani said, “the Caspian Sea is very important for countries sharing it and must become a reliable source for these countries’ development. Several agreements have been signed, indicating that we are able to resolve issues,” president said.

On fighting terrorism, President Rouhani noted Iran’s role and position and said “those speaking of forming a coalition against ISIL are those who had provided financial and military aid for this terrorist group in the past. Iran, however, has been countering ISIL since three years ago when Syria and Iraq requested us to do so.”

“Terrorism threatens the whole world and every country must provide aid to stop it,” President Rouhani asserted, “airstrike is at best a showoff move, but to counter terrorism in the field certain practical measures such as preventing these terrorist groups from getting their hands on financial and military aid should be taken.”

President Rouhani noted that Islam preaches human dignity, respect for others’ rights and peaceful coexistence, and said, “ISIL has nothing to do with Islamic culture. We condemn this anti-Islamic movement that demands governing people’s lives through terror and coercion of their distorted ideology.”