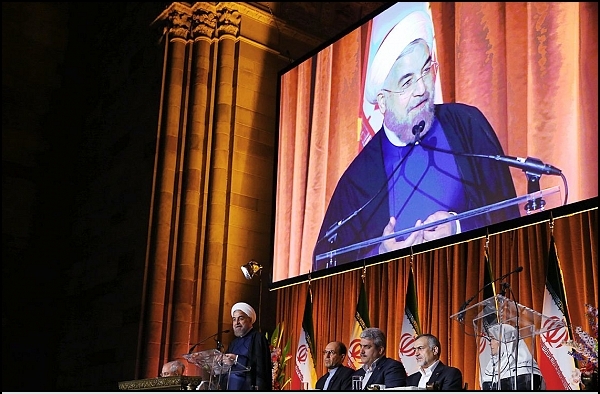 Rouhani: Iran fought terrorism ‘before any other country’

TEHRAN, Sep. 27 (MNA) –Iran’s Hassan Rouhani has said reporters in New York the Islamic Republic of Iran has fought terrorism and its roots.

Rouhani attended a press conference with over 166 international media outlets on the sidelines of the UN General Assembly in New York last night.

NPR (US national radio broadcaster) asked Rouhani about the Iran’s parliament criticism of the government’s conduct of the negotiations and whether there would be measures by his government to strike a deal with the 5+1. “This is quite natural that there are different opinions voiced in the country about nuclear issue,” Rouhani replied, “nuclear negotiations has full support of the nation and all high-ranking officials of the state including the Leader of the Islamic Republic of Iran; the only rational solution for nuclear issue is negotiations.”

Asked by Press TV correspondent about sanctions and how would the cabinet address the issue, Rouhani told that sanctions, either imposed by US unilaterally, or by the EU and the UN, were illegal an inhuman in nature. “We discussed sanctions with all parties, and all agreed that a deal is necessary to address the issue of sanctions very soon,” Rouhani said.

German TV channel ARD correspondent asked Rouhani about what he believed as ‘the worsening conditions of human rights in Iran,’ and what Mr. Rouhani thought about, the president told that after June 2013 presidential elections, “Iranians feel more security, more unity and solidarity; if you ask the average Iranians, they will tell you this fact,” said the president, “the human rights issue of any country is specific to that country to be viewed in the framework informed by that country’s specific culture.”

“As the president, my duty is to guarantee that the constitution is executed to the letter, and I am committed to citizenship rights and the constitution; as I promised the nation in my election campaign last year, now I am in the right track promised,” Rouhani added.

“I believe the situation has improved now for social and legal issues more than that in the past. The report by UN Special Rapporteur could not prove to be a good criterion for measuring the realities inside Iran; the situation for universities, political parties, and other activists has been changed drastically,” Rouhani told the press.

Lebanese Al-Mayadeen Network correspondent asked president whether it would be paradoxical that the US-led coalition, where Arab countries in the region also significantly contribute to the strikes against ISIL, fights terrorists and simultaneously they support the same terrorists in Syria. “Long before any country in the region, Iran had been providing support to the Iraqi army, and we have been pioneer recently in Iraq, responding to an Iraqi request for help,” Rouhani said.

Bloomberg correspondent asked Rouhani why his positions on ISIL in UN General Assembly address differed positions stated by the US president on the terrorist group, and how Iran follows the developments in the region. “Our nations have had good relations, and our nation always respect the American public and vice versa; the real difference is policies by the governments; we believe that the policies of the US should reflect their national interests, since enmity toward Iranians definitely would damage their interests, as it has been so,” responded Rouhani.

Associated Press reporter asked whether Iran would be willing to make concessions in helping US fight ISIL and gain in exchange in nuclear deadlock, president said that he would not think the statement is accurate and exact. “Help US fight ISIL? Or US help us. We have been fighting ISIL for four years. We had provided the people of Iraq the real help to counter ISIL. Iraqi government and authorities in Kurdistan Autonomous Region have acknowledged our role, saying that were it not for Iran’s help, more and more Iraqi cities would fall to ISIL,” president asserted.

USA Today correspondent told Rouhani that many in the world would rejoice that Iran joins the coalition against ISIL; however, Iran supports Hezbollah and Syrian Bashar al-Assad, asking whether Iran would rule out its support to these groups. “I wonder why you label a group which inspires Lebanese public respect and has seats in the country’s parliament as terrorist; in my meetings, many officials of countries praise the resistance. So, why we should name a movement which counters violation of Lebanese borders ‘terrorists,’” Rouhani exclaimed.

Asked by Japanese NHK reporter about the probability that Rouhani and Obama would talk via phone call, Rouhani downplayed the importance attached to the phone call, saying that “it is important that we move toward solving problems; a movement which would benefit, Iranians, Americans and the other nations as well.”

The next question came from another Japanese source; Yumiori daily newspaper correspondent asked Rouhani whether president thinks a second such phone call would be possible with president Obama. “it is not a predestined fact that we should always have a phone call whenever I am in New York; once upon a time there was a phone call, because the situation demanded; anyway, we have no such thing in the agenda this time,” Rouhani replied.

French daily Le Monde correspondent asked president how Iran is willing to close the nuclear issue by reducing the level of enrichment. “The Islamic Republic of Iran enriches uranium based on provisions made in the recent agreements with the IAEA to meet its domestic needs; we have necessary modifications and now the ball is in the other sides’ field,” implying that the G5+1 now should decide to react properly.

US CBS correspondent asked Rouhani whether tangible changes would be received by Iran in US positions on nuclear issue conducive for reaching a deal. “We do not divulge the details of the negotiations to the media; the negotiations have made little progress, and if both sides seek an agreement, they should take larger steps,” Rouhani told CBS reporter.