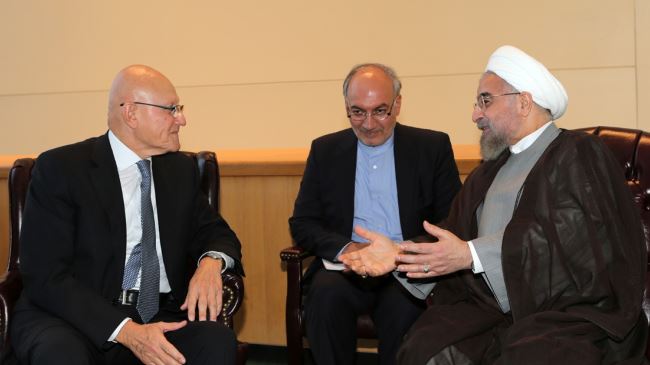 Iran’s President Hassan Rouhani has warned against plots to fan the flames of conflicts through tribal and religious strife in certain countries in the Middle East.

“Violence and terrorism are the main problems in the Middle East,” President Rouhani said in a meeting with Lebanese Prime Minister Tammam Salam in New York on Friday.

He added that if all Lebanese ethnic and religious groups are involved in running the country’s affairs, Lebanon will enjoy sustainable security and development.

He expressed hope that the Lebanese army would manage to ensure the country’s security and defend people against terrorist groups.

“Lebanon has always been a role model of peaceful coexistence among ethnic and religious groups, … and like in the past, Iran takes it upon itself to offer any help required in order to strengthen tranquility and unity in Lebanon,” Rouhani stated.

The Lebanese premier, for his part, said the expansion of ties with Iran is a priority for his country.

Foreign-backed militants in Syria have frequently attacked Lebanon’s border areas where the majority of people support the Syrian government.

The al-Nusra Front militant group and the ISIL Takfiri terrorists have been operating against the Lebanese army near the town of Arsal on the Syrian border. Lebanon has sent reinforcements to the area.