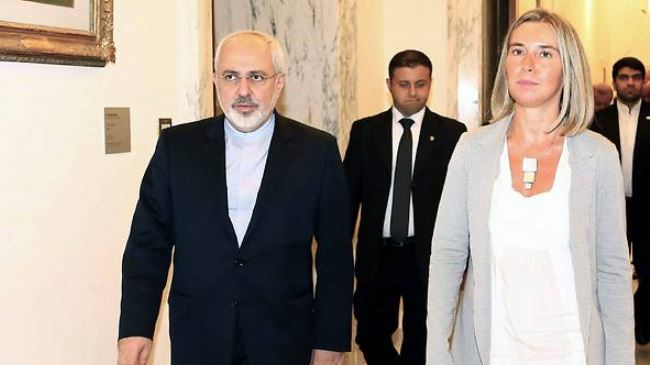 Italian Foreign Minister Federica Mogherini has highlighted Iran’s role in the establishment of stability in the Middle East.

Mogherini, who has been appointed as the next EU foreign policy chief, also underlined the need for consultations with Iran on developments and crises in the Middle East.

The top Italian official made the remarks in a meeting with his Iranian counterpart Mohammad Javad Zarif in New York on Thursday on the sidelines of the 69th UN General Assembly meeting.

Zarif, for his part, welcomed close consultations between Tehran and Rome and updated his Italian counterpart on Iran’s viewpoints on terrorism and Takfiri ISIL operations in the region.

He said the maintenance of stability and security in the Middle East as well as the promotion of friendly ties with all neighboring countries is a central plank of Iran’s foreign policy.

Touching on Iran’s nuclear energy program, Zarif said that Iran was entitled to peaceful nuclear technology and briefed his counterpart about Iran’s conditions for a final comprehensive nuclear deal.

Iran and six world powers – the United States, France, Britain, Russia, China and Germany – are currently in talks to work out a final accord that would end the dispute over Tehran’s civilian nuclear work.

Zarif, outgoing EU foreign policy chief Catherine Ashton and US Secretary of State John Kerry held a meeting in New York on Thursday to discuss progress made during the ongoing nuclear talks and to confer on how to proceed with the negotiations.

Zarif leads the Iranian negotiating team while Ashton heads the opposite side. Italy’s Mogherini is to succeed Ashton, whose term ends in October.