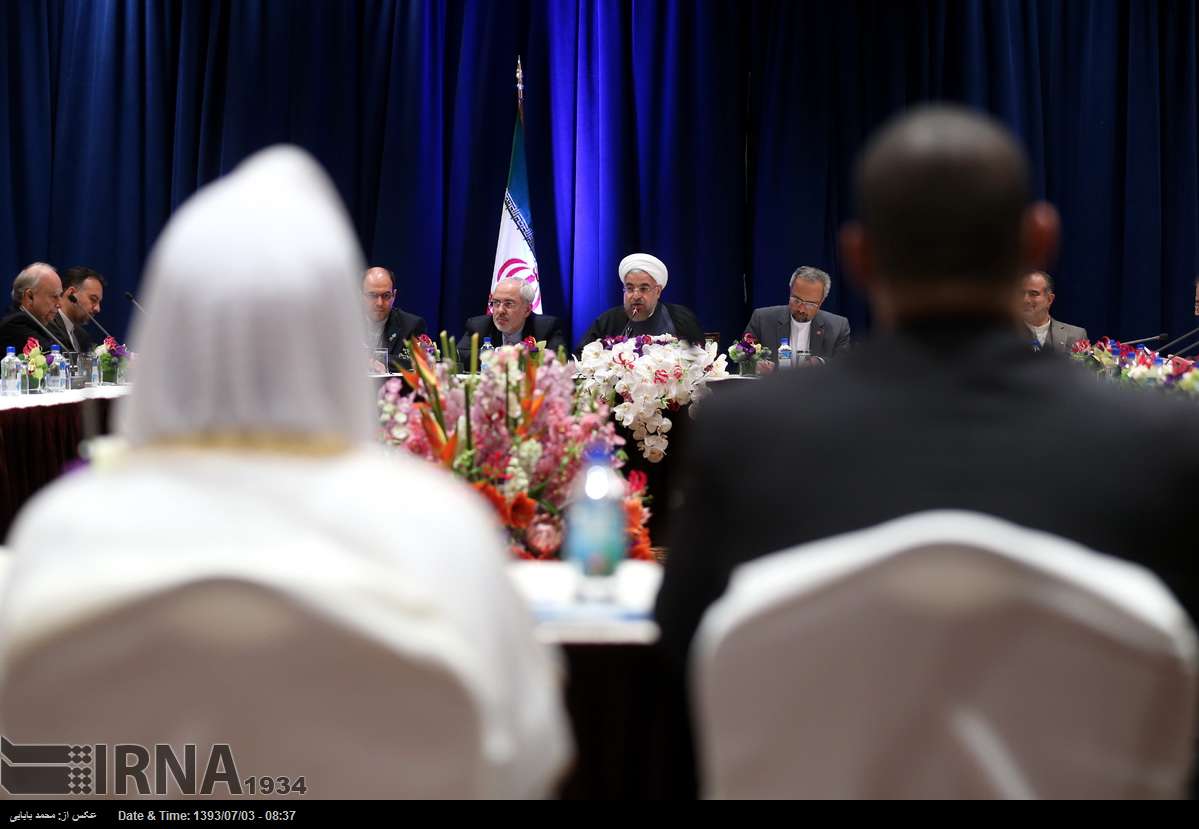 New York, Sept 25, IRNA – President Hassan Rouhani has urged Islamic scholars as well as the community leaders to endeavor for the unity among Muslims and spread the compassionate messages of the religion of Islam.

In a meeting with American Muslim dignitaries and Islamic community leaders on Wednesday, he warned of attempts by the enemies of Islam to sow discord by forging terrorist moves under the guise of religion and jihad (holy war).

“The Islamic Revolution in Iran launched the Islamic Awakening across the Middle East. Therefore, some people tried to mar the image of Islam to impede this movement,” he said.

The president who is in New York to attend the 69th session of the UN General Assembly also said the anti-Islam attempts in Iraq and Syria under the pretext of jihad which aim at introducing it as a violent religion will not accomplish.

“Fortunately, everybody will little by little understand that they have false claims to be Muslims. Those who were deceived and joined the terrorist groups are gradually waking up.”

President Rouhani cautioned that there was a long way to go through the plots and called for prudence so that no new machinations will be be hatched on the way of Islam and the Islamic civilization.

He referred to his speech at the 2013 UN General Assembly in which he suggested the World Against Violence and Extremism and said the proposal was unanimously welcomed by the global community.

“Muslims have always been the flag bearers of compassion and illumination. We should not permit others to falsely carry the flag,” he added.

Rouhani evaluated the Gaza crisis a test for regional countries which exposed their real picture and said, “In the case of Daesh and terrorism, we learned that absence of unity leads to infiltration and expansion of extremist groups.”

The president of Iran also said that the Islamic Republic has no intentions of interfering the fate of any country. “The Islamic Republic of Iran does not plan to interfere in Iraq and Syria either, but will help them based on their demands.”

“If any country asks us for combating terrorism, we will help them against violence and terrorism within our might,” he said stressing that Iran was the first country to help the people of Iraq against Daesh terrorists.

He also praised the significant role played by Muslims in the US scientific centers and said, “Despite the fact that some people are trying to batter Islam, there are others who are giving dignity to Islam. Therefore, we should not be disappointed.”

“If a small group called Daesh is committing crimes under the guise of Islamism,” he said, “The nations and Muslims by uniting and strong institutions can easily stop such moves and assist each other in security and development.”