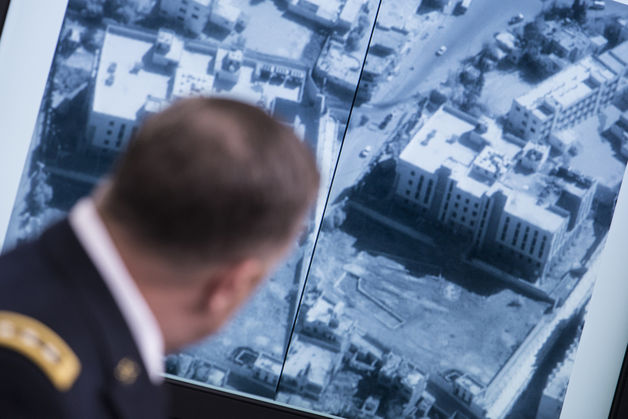 As the U.K. prepared for a parliamentary vote tomorrow to authorize joining the broadest Arab-U.S. military coalition since the 1991 Gulf War, aircraft and drones operated by the U.S., Saudi Arabia and the United Arab Emirates attacked 12 “modular” refineries Islamic State uses in its oil-smuggling operations, U.S. Central Command said in an e-mailed statement. They also hit Islamic State headquarters, a camp, and other targets in Syria, killing at least 14 fighters, the Syrian Observatory forHuman Rights said on its Facebook page.

“These small-scale refineries provided fuel to run ISIL operations, money to finance their continued attacks throughout Iraq and Syria and an economic asset to support their future operations,” the command said in the statement, using an acronym for another name for the militant group.

Islamic State may have been raising more than $2 million a day from oil sales in Iraq and Syria, paid either in cash or bartered goods, according to Luay al-Khatteeb, a visiting fellow at the Brookings Institution’s Doha Center in Qatar.

While that’s not enough oil to affect world markets, illicit oil sales at discounted prices are a substantial source of revenue for Islamic State, along with income from extortion, ransom and taxes in areas it controls, according to U.S. intelligence officials and anti-terrorism finance experts.

Fighter jets, bombers, Tomahawk missiles and drones were used to conduct 33 strikes across Syria through yesterday to contain and weaken the militant group, mostly near its stronghold city of Raqqa and along the Iraqi border.

The Syrian Islamist group Ahrar al-Sham called for members to evacuate training camps and other sites, SOHR said. The Islamist group, which has been joined by some al-Qaeda militants in its fight against Syrian leader Bashar al-Assad and isn’t part of Islamic State, also said its fighters should stop using satellite and wireless communication unless necessary and to move, hide and disguise heavy weapons, the observatory reported.

The only Muslim state in the North Atlantic Treaty Organization, Turkey has seen a flood of refugees, with more more than 130,000 Kurds entering from Syria after Islamic State fighters seized dozens of villages near the border.

After securing the release of 46 Turks from Islamic State on Sept. 19, Erdogan’s government will discuss the use of Incirlik air base in the country’s southeast, as well as the formation of buffer zones and a no-fly area in Syria, Hurriyet said, citing a high-level official it didn’t name.

U.K. Prime Minister David Cameron is recalling parliament to meet tomorrow in London for a vote to authorize joining the international airstrikes.

Britain “will do what it takes to make sure we play our part,” U.K. Deputy Prime Minister Nick Cleggtold LBC radio today, adding the campaign may take “considerable time.”

While the opening offensive this week employed almost as many bombs and missiles in Syria as were used in the first month of strikes against Islamic State in Iraq, the blitz of firepower is “only the beginning,” Rear Admiral John Kirby, the Pentagon’s top spokesman, said on Sept. 23.

The strikes are having a limited impact on oil markets, said Richard Mallinson, an analyst at Energy Aspects Ltd. in London. Plentiful oil supplies have pushed crude prices close to a two-year low.Brent crude for November settlement fell 26 cents, or 0.3 percent, at 1:16 p.m. in Dubai to $96.69 a barrel on the London-based ICE Futures Europe exchange and has traded below $100 a barrel for more than two weeks.

“Most of the production in the regions controlled by Islamic State is already lost to the market,” said Mallinson. “Syrian production was lost several years ago early in the civil war there, and Iraqi production in the north has been shut in or disrupted for several months now.”