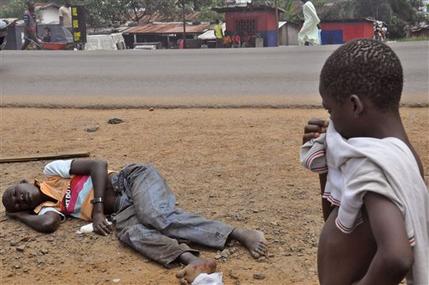 GENEVA — The number of people killed by the Ebola outbreak in West Africa has reached at least 2,917, driven by the continuing rapid spread of the disease in Liberia and Sierra Leone, though in Guinea the number of new cases appears to have stabilized, the World Health Organization reported Thursday.

At least 2,909 people have died in Guinea, Liberia and Sierra Leone, with 6,242 reported Ebola cases over all, according to the latest report of the United Nations health body. Nigeria and Senegal have recorded a total of eight deaths and 21 cases of infection.

More than half the total deaths and infections have occurred in Liberia, which reported more than 1,700 new cases in the last 21 days, the W.H.O. said. In Sierra Leone, two districts at the heart of its Ebola outbreak have recorded declining numbers of people infected, but the organization said further investigation was needed to establish whether this was a clear trend and whether there was at the same time a sharp rise in the number of new cases in the capital, Freetown, as has been reported.

“The situation in Guinea, although still of grave concern, appears to have stabilized,” the United Nations organization said, observing that the number of new cases in the capital, Conakry was moderate and stable.

The outbreaks in Nigeria and Senegal were “pretty much contained,” the health organization’s Africa office reported this week, noting that Senegal had only recorded one case of infection at the end of August, and that Nigeria had not found any new cases since Sept. 8.

The latest estimates of the spread of the disease follow a somber projection by the health organization that the number of people infected by Ebola could hit 20,000 by early November, and another forecast, by the United States’ Centers for Disease Control and Prevention, that the number of infections could reach 1.4 million by January.

Both projections presented worst-case scenarios, and officials of both organizations thought it probable that the scaling up of the international response would avert these outcomes.

But seven weeks after the W.H.O. declared the outbreak a global health emergency, its latest report shows the capacity of treatment centers in the worst-affected countries still falling short of requirements.