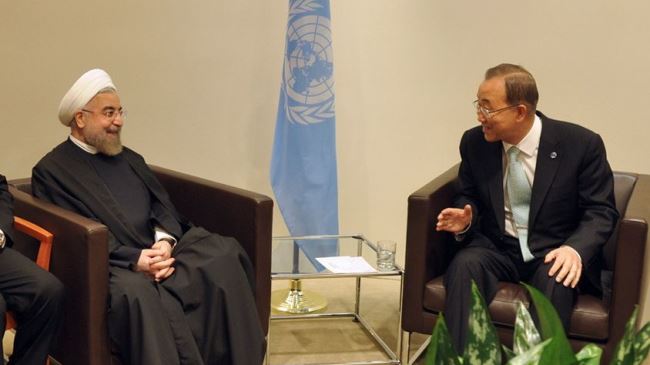 Iran’s President Hassan Rouhani has referred to the hegemony imposed by the world powers as the biggest problem facing the world.

In a meeting with United Nations Secretary General Ban Ki-moon in New York on Tuesday, Rouhani said, “Today’s world is faced with many problems, namely terrorism, violence, and environmental threats.”

“But the biggest problem is the great powers’ hegemony and injustice in today’s world.”

Criticizing some countries’ double standards, the Iranian president said, “When some countries find terrorists’ actions in their interest, choose silence vis-à-vis killing of humans, and when find these actions damaging to themselves, start to retaliate.”

The UN chief said, ”Unfortunately, common people have lost trust in the international community’s capability in fighting terrorism, and we seek more serious presence and strategic and constructive role on the part of Iran in this regard.”

Referring to nuclear talks between the Islamic Republic and the five permanent members of the UN Security Council – Russia, China, France, Britain, and the US – plus Germany (P5+1), Rouhani said it is a great mistake to think Iran came to the negotiation table under pressure.

“Iran entered negotiation with serious resolve and in order to serve the interest of itself and others.”

“As long as the Iranian nation’s rights are not damaged, we are prepared for agreement,” added the Iranian president.

Ban praised Iran’s fruitful interaction with the International Atomic Energy Agency and its active participation in negotiations with the P5+1.