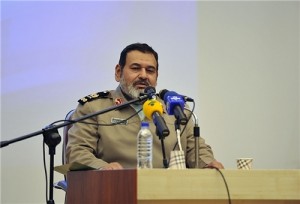 A senior Iranian military commander says there is no need for the involvement of Iranian armed forces in Iraq’s ongoing battle against ISIL terrorists operating in the Arab state.

Chief of Staff of the Iranian Armed Forces Major General Hassan Firouzabadi hailed the achievements of the Iraqi army and volunteer forces in their fight against ISIL militants, saying there is no need for the presence of Iranian soldiers on the battlefield against the Takfiri terrorists.

The top commander made the comments on the sidelines of a massive military parade held in Tehran on Monday to mark Sacred Defense Week.

Firouzabadi further stated that Iran has common borders with Iraq and provides military consultations to the neighboring Arab country.

He also cast doubt on the sincerity of the United States in creating a so-called anti-ISIL coalition and said such an alliance merely seeks to gain dominance in Iraq, Syria and other regional states under the guise of battling the Takfiri militants.

Earlier this month, US President Barack Obama said Washington was assembling an international coalition to “snuff out” the ISIL extremist group.