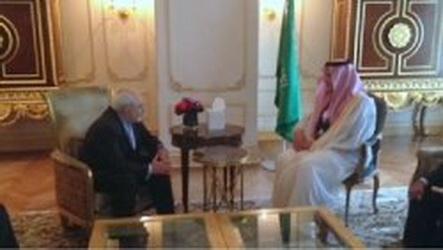 ‘Both my Saudi counterpart and I believe that this meeting will be the first page of a new chapter in our two countries’ relations,’ Zarif said after his hour-long meeting with the Saudi minister of foreign affairs.

The Iranian top diplomat expressed hope that this ‘new chapter’ will be a fruitful one, inclusive of the establishment of peace and security both in the region and in the world along with safeguarding the interests of not only the two nations, but also that of the entire Muslim nations.

The Saudi Foreign Minister Saud al-Faisal, too, said for his part after the meeting that he was aware of the significance and sensitivity of the emerged crisis (due to the IS nuisance).

‘We have an opportunity to encounter that crisis and we believe using this opportunity optimally, and refraining from making the past mistakes anew, we can reach agreement on ways for encountering this very sensitive crisis,’ he said.

He said that both the Islamic Republic of Iran (IRI) and the Kingdom of Saudi Arabia (KSA) are influential countries in the region and cooperation between them will leave undeniable effects on the establishment of peace and stability both in the region and in the world.