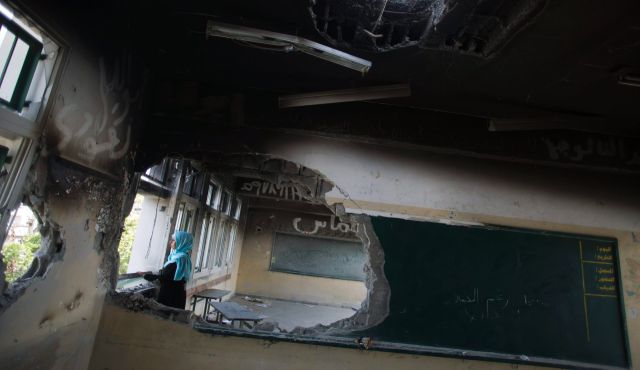 A Palestinian teacher looks out of a window of a damaged classroom, during the first day of school, in Gaza City’s Shijaiyah neighborhood, Sunday, Sept. 14, 2014. Photo by AP

Israel and Palestinian factions, including Hamas, will meet in Cairo on Tuesday to commence negotiations for a long-term cease-fire in the Gaza Strip, an Israeli official told Haaretz on Saturday.

According to the senior Israeli official, the talks were originally scheduled for Wednesday, but were moved forward so as not to clash with the start of the Jewish New Year that evening.

The sides agreed to commence negotiations for a long-term cease-fire in an Egyptian-mediated deal that brought an end to 50 days of fighting between Israel and militants in the Gaza Strip last month. Those talks did not involve direct meetings between the sides. Israel considers Hamas a terrorist organization while Hamas refuses to recognize Israel’s right to exist. Egyptian officials served as mediators in those talks, shuttling between the delegations of Israel and various Palestinian factions.

Egypt will also host talks between rival Palestinian factions within days, the state news agency MENA was cited by Reuters as saying on Saturday. The report quoted an Egyptian official as saying that delegations from Fatah and Hamas would meet on Monday “to complete the Palestinian reconciliation.”

Azzam Ahmed, a Fatah official and head of the Palestinian delegation to last month’s talks, confirmed the plan for reconciliation talks to begin this week, according to the Palestinian WAFA news agency.