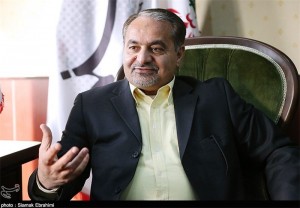 TEHRAN (ISNA)- A former member of Iranian nuclear negotiating team Hossein Mousavian said a change in Iran-US ties is not an ‘option’ anymore, but a ‘necessity’.

“A need to change Iran-US ties is not an option anymore, but it is necessary and urgent. Iran and regional players such as Turkey, Saudi Arabia, Egypt and members of Persian Gulf Cooperation Council (PGCC) need to negotiate to stop the current growing path of extremism and terrorism in the Middle East,” he said in a conference on strategy of geopolitical and economic developments of the world sponsored by Swedish and Norwegian foreign Ministries in Oslo, Norwegian Capital.

The full text of his speech comes as follows:

After a decade of failed nuclear talks, the EU3+3 (China, France, Germany, Russia, the United Kingdom and the United States) and Iran signed an interim nuclear deal, the Joint Plan of Action, on November 24, 2013. Reasons for this first success of engagement were:

D.Impact of sanctions on the Iranian economy

E.The failure of the world powers to restrain Iran’s nuclear program through pressure.

Indeed, Iran responded to the sanctions by:

1.Increasing the number of installed centrifuges to almost 20000

3.Increasing the level of enrichment of some of this uranium from 3.5% to 20%

5.Producing of fuel plates for the Tehran Research Reactor (TRR)

6.Building the 2nd enrichment plant near Fordo, protected under the mountains.

The interim deal has resulted in positive results for both parties.

1.Has converted much of the20% enriched UF6 into oxide for fabrication into fuel for the TRR and diluted the remainder to no more than 5%

2.Stopped enriching uranium to over 5%

3.Halted installing additional centrifuges at the Natanz and Fordo plants and components into the under-construction Arak reactor

4.Has not built new enrichment plants at additional locations

5.Continued centrifuge R&D in a manner that does not result in an accumulation of enriched uranium

7.Provided the IAEA with enhanced access to its nuclear facilitates.

The IAEA in its September report reaffirmed that Iran has fulfilled its commitments under the Joint Plan of Action.

1.Paused their efforts to further reduce Iran’s exports of crude oil and lifted sanctions on petrochemicals, gold and other precious metals, sanctions on Iran’s auto industry and blockade of spare parts for Iran’s civil aviation.

How to Bring the Nuclear Engagement to Final Success

Following the interim deal, subsequent rounds of talks resulted in Iranian and P5+1 negotiators making good progress towards a comprehensive deal and addressing some key issues such as the future of the Arak heavy-water reactor, the Fordo enrichment plant and increased access in Iran for International Atomic Energy Agency (IAEA) inspectors. However, they could not yet agree on a comprehensive nuclear deal. As a result, the talks were extended through November 24, 2014 and while both sides pledged to continue complying with the conditions of the interim deal.

A final deal must reflect the rights and obligations of parties to the NPT and IAEA Safeguards Agreements.

As the negotiators resume their talks over Iran’s nuclear program in New York, the world powers and Iran face a difficult task to bridge the remaining gaps and reach a comprehensive nuclear deal within the next three months. The most difficult remaining issues are:

2-A realistic timetable for sanctions removal.

The key elements of a comprehensive deal would be the followings:

1)Concerns related to the Heavy Water Reactor at Arak would be alleviated by technical conversion to reduce its capacity to produce plutonium from 10Kg to 1Kg per year. Moreover, Iran would make a long-term commitment to refrain from constructing a facility capable of recovering plutonium from the spent fuel.

2)Iran would accept convert Fordo into an R&D site for its centrifuges and other peaceful nuclear technologies.

3)Tehran would commit to fully implement the agreed upon transparency measures and enhanced monitoring, including ratifying and implementing the Additional Protocol.

4)To define the size and scope of Iran’s uranium enrichment program in consistent with its civilian practical needs, a resolution would involve:

• Limiting Iran’s enrichment level to below 5%

• Tailoring its enrichment capacity to the needs of its civilian nuclear activities.

A possible compromise on the enrichment capacity could entail a phased approach as follows:

1.For a period to be agreed, Iran would maintain a capacity sufficient for enriching uranium for research reactor fuel.

2.Iran would keep its operating enrichment capacity at about the current level but would begin to phase out its first-generation of centrifuges machines in favor of more advanced, higher-capacity centrifuges which would make its enrichment program more cost effective.

These measures would create a window of 7 to 10 years period for confidence building, which in combination with intrusive inspections and monitoring, will ensure that Iran can verifiably maintain a peaceful nuclear program with a prolonged timeframe for a breakout.

5)Iran would receive international cooperation on its civil nuclear program.

6)The world powers would remove all nuclear related unilateral and multilateral sanctions against Iran.

7)Upon the implementation of the final step of the comprehensive agreement, the Iranian nuclear program will be treated the same of that of any non-nuclear weapon state party to the NPT.

The Regional Implications of a nuclear Deal

Resolving the Iranian nuclear issue would be a success for both Iran and the West, and it could then serve as the basis for a broader agenda for a Weapons of Mass Destruction Free Zone in the Middle East. With a broader vision, the world powers and Iran can agree on model for the Middle East based on six principles:

1)No nuclear weapon in the Middle East

2)Ban on reprocessing, i.e. the separation of plutonium in the Middle East

3)No enrichment of uranium beyond 5% in the Middle East

4)No stockpile beyond domestic needs for nuclear civilian use

5)Establish a regional or international consortium for producing nuclear fuel and,

6)Implement regional confidence building and verification measure on WMD non-proliferation by creating a regional authority like Euratom or the Argentine-Brazilian mutual inspection arrangements in charge of regulating nuclear development and verifying its peaceful nature in the region.

The Iran nuclear issue is political in nature as illustrated by the exaggerated debate over the nature of Iran’s nuclear program. The fact is that the nuclear issue has been aggravated by Iran-US hostilities and, as long as this animosity continues, negotiations on nuclear issues alone will not lead to peace between Iran and the US. Peaceful resolution to the nuclear crisis could, however, open the door for broad dialogue and engagement between Iran and the US. The present policy of nuclear engagement will fail if neither Washington nor Tehran has a grand strategy for broad engagement.

A “Comprehensive Solution Package” for these two different dimensions of the US-Iran problem and the nuclear issue, is essential. To reach a long lasting solution on the nuclear case, we need to contextualize the nuclear and other issues within a bilateral, regional, and international framework, recognizing the need to negotiate on other major differences between Tehran and Washington while simultaneously cooperating on common interests.

Iran and the US have common interests in the “War on Terror” and peace and stability in the region. Whether they like it or not they are natural allies in Afghanistan because both capitals are seeking peace and stability in Afghanistan coupled with the safe exit of American troops at the end of 2014. During 2001, under President Khatami, Iran and the US cooperated to overthrow the Taliban and successfully facilitated the formation of a national unity government in December 2001 through Iran’s involvement in the UN-sponsored talks in Bonn on the future of Afghanistan.

Furthermore, Iran and the US are natural allies in Iraq and both have backed the previous and the current governments in Baghdad. Iran and the US indirect cooperation made the possible the collapse of Saddam Hussein’s dictatorial regime in 2003. They both oppose the efforts by the intolerable and uncontrollable fundamentalists of the Islamic State of Iraq and the Levant (ISIS) or Daesh to dismantle Syria and Iraq and further divide the region along sectarian lines.

The deep-rooted mistrust between the US and Iran is a major obstacle to direct cooperation in fighting mutual enemies, making it impossible, for example for Iran’s Quds Force and the US CENTCOM to partner in the war against ISIS. This animosity is why both sides have had to coordinate their respective moves indirectly. The recent fight over Amerli in eastern Iraq has been one of the most important battles against ISIS—where the Iranian Revolutionary Guard Quds Force alongside with Kurdish Peshmerga fighters supported the ground attacks, while the US handled the airstrike resulting in defending this strategically located town.

President Obama in his address to the nation on the fight against ISIS said that American military power is unmatched, but he also confessed that it requires a broad coalition to “eradicate a cancer like ISIS.” Without Iran’s active participation and cooperation, Washington’s international coalition against ISIS will fail for the same reasons it did after the 2001 war on terror against Al Qaeda and the 2011 international coalition on Syria.

Without Iran, no regional or international coalition aimed at addressing major crises in the Middle East would be successful. It is therefore time for the US, the world powers and the regional actors to engage with Iran and accept Iran’s regional power and influence.

The need for a transformation in Iran­-US broad dialogue is no longer an option but an urgent necessity to halt and reverse the current trajectory towards further sectarianism, extremism and terrorism spreading throughout the region.

In fact, the current crisis in the Middle East, which is embroiled in civil wars, sectarian conflicts and the rise of the most dangerous version of terrorism, has created a new geopolitical context for US-Iran cooperation to restore peace and stability from the Persian Gulf to the Mediterranean region and to the borders of India.

Despite the historical mistrust, the two administrations have been engaged in genuine and serious negotiations on the nuclear issue and such direct engagement has proved vital to reach the current unprecedented outcome. The achievement thus far in the nuclear negotiations is an indication of what these two sides can attain by engaging directly and more broadly to tackle urgent regional developments.