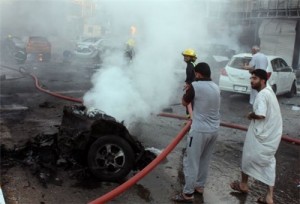 A series of bomb attacks have claimed lives of 28 people and injured dozens more across Iraq, security sources say.

Iraqi officials say at least 17 people lost their lives in separate bombings in the capital Baghdad on Friday.

The Baghdad explosions targeted a mosque and two outdoor markets in several Shia districts. Several cars and nearby buildings were damaged in the blasts.

In another incident of violence, three people were killed in a car bomb explosion in the southern town of Mahmoudiyah.

Separately, eight people lost their lives in a bomb explosion in the northern city of Kirkuk.

No group has claimed responsibility for the bombings, but the attacks bore the hallmarks of Takfiri militants fighting the Iraqi government.

Meanwhile, senior Iraqi Kurdish officials have expressed dismay over Turkey’s silence on the atrocities committed by the ISIL Takfiri terrorists.

Tension is simmering between Iraq’s semi-autonomous Kurdistan region and Turkey over Ankara’s refusal to support the Kurds in their fight against the ISIL Takfiri group.

Kurdish Peshmerga forces from the Iraqi Kurdistan along with the Iraqi army are fighting the ISIL militants in the crisis-hit country.

The prime minister of Iraq’s Kurdistan region, Nechervan Barzani , has expressed disappointment at Turkey’s refusal to provide military support, stressing that Erbil had much higher expectations from Ankara.

The Takfiri ISIL terrorists currently control parts of eastern Syria and Iraq’s northern and western regions. They have committed heinous crimes and threatened all communities, including Shias, Sunnis, Kurds, Christians and Izadi Kurds, during their advances.

The West and its regional allies, including Qatar, Saudi Arabia, and Turkey, are reportedly giving financial and military support to the militants.