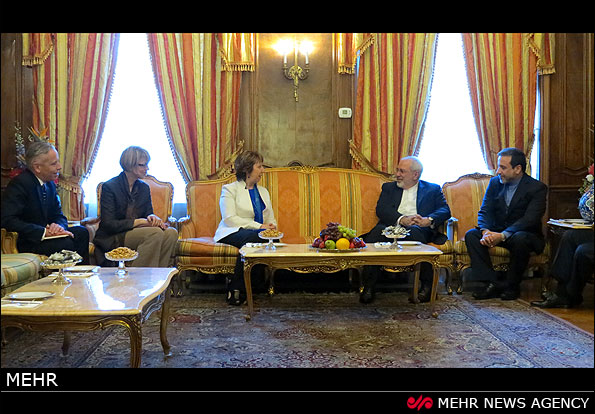 Zarif hopes for road map for full removal of sanctions

He made the remarks in an exclusive interview with the editor of an American monthly, The National Interest, Jacob Heilbrunn in New York City on Thursday.

Referring to the talks with the 5+1 in geneva last November, he said the negotiating sides agreed to both make sure that Iran’s nuclear program will remain exclusively peaceful and also to remove all the sanctions.

He stressed that “All the U.S. needs to do is to reach a conclusion that a deal with these parameters is better than no deal that would only get the United States to continue these sanctions.”

He said no one in their right mind would be interested in the US having a military adventure in Iran because Iran is the only country in the region that is capable of helping in the maintenance of stability.

He believed that Iran can claim that we have withstood all this pressure—we have paid the economic price, but withstood the pressure.

Commenting on the American plan to assemble a collation against terrorist Daesh, Zarif said the problem with the plan was that neither the US nor the proposed coalition members have a serious policy.

He explained that the so-called Islamic State is not a new phenomenon because it has actually been there since the US invasion of Iraq, being in fact an outcome of the invasion.

Zarif said the terrorist group managed to grow into a monster with the support of the United States and some of its allies in the region and became a source of a menace not only to the region but the whole world.

He went on to advise the United States and its coalition—which he called as the Coalition of Repenters to learn a lesson from the past and deal with this problem, because ISIL is the same terrorist organization, whether in Iraq or in Syria.

He believed in the necessity of a strong central authority in order to fight the terrorist menace and said the US and its coalition partners have to come to the realization that they cannot differentiate between this threat in different places.

He urged all to get a realistic assessment of the threat in the region and to attempt to deal with that threat.

On relations with the US, the Iranian foreign minister said the first thing to do a amend ties between the two countries was to deal with the nuclear issue because “if we resolve the nuclear issue, there will be one less obstacle in reducing tension, at least, between Iran and the United States.”

He went to stress that he did not “believe that tensions in our relations are inherent or unavoidable. There are policies that give rise to tension, and I don’t think that these policies need to be there.”

“So I’m hopeful that once we address this fundamental issue of the nuclear problem, then the road will be much less cumbersome to deal with other issues. But I don’t see, all of the sudden, a radically different type of relations coming out. But there will be much less tension, it will be much more conducive to understanding and coordination,” Zarif added.