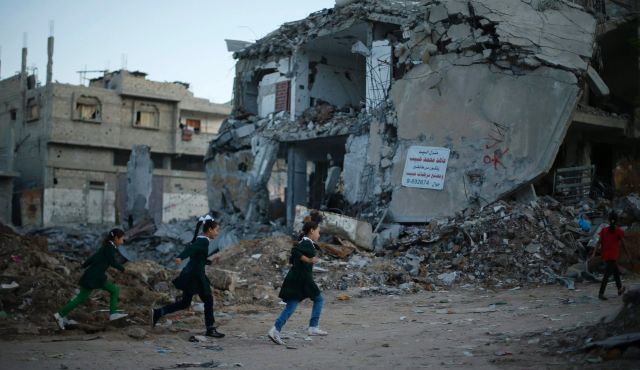 War? What war? Gaza gets forgotten in a hurry

Palestinian students walk past houses that were destroyed by the Israeli offensive, as they make their way to the first day of the new school year in the east of Gaza City September 14, 2014. Photo by Reuters

Even if we put aside the moral blindness in Israel, which wasn’t shocked by a single event during the fighting, it’s impossible to comprehend the complacency afterwards.

Sometime this summer, between the singer Ninet’s getting pregnant and getting married, a war went on here. It ended and was forgotten.

That’s how it is in a bipolar society that fluctuates between mania and depression, between scandal and festivities, between commemoration and suppression. One moment the entire nation is an army at war, the next it’s as if nothing had happened. Even the Israeli sacrifice has been forgotten – not to mention the killing and destruction in Gaza, which were never really mentioned in the first place. Except for the direct victims, nobody seems to remember that a war went on.

It goes without saying that nobody is drawing conclusions or learning lessons (except for defense officials and their extortion of the state budget). Israel is jubilant again. It has returned to its nonsense as if there hadn’t been a war, as if another will never break out, as if an hour’s drive from Tel Aviv there was no devastated swath of land, smashed by Israel’s hands, where the inhabitants are suffering horribly while Israel is exultant.

Gaza hasn’t forgotten. There’s a whole list of people who can never forget: the 1,500 orphaned children; the 3,000 wounded children; the 1,000 crippled children; the 110,000 residents still crowded in UNRWA shelters in inhumane conditions; the tenants of the 18,000 buildings destroyed or badly damaged, leaving 2.5 million tons of debris nobody knows what to do with; the 450,000 people without water and the 360,000 who, according to the World Health Organization, are suffering from PTSD after our bombardments. None of these people can be expected to forgive, and this isn’t the first time this has happened.

Not only has Israel forgotten they exist, the world might be about to abandon them. Apart from Norwegian Foreign Minister Borge Brende, no foreign statesman has bothered to visit Gaza to see the scope of the disaster. That’s because of Hamas; you know, those guys the Quartet once decided, in one of its most idiotic decisions, not to talk to. Then there’s Israeli propaganda, which compares Hamas to the Islamic State.

Israel’s suppression and the international abandonment of Gaza are intolerable. Even if we put aside the crassness and moral blindness in Israel, which wasn’t shocked by a single event during the war, it’s impossible to comprehend the complacency afterwards.

There was a war here, Israel paid too, and already it’s forgotten? No soul-searching? No cost-benefit analysis, at least? The public debate hasn’t found time for questions that should disturb every Israeli, like, uh, was it worth it? What did Israel get out of this war? What’s it doing to prevent the next one? Do not disturb, Israel is busy with zero-VAT on apartment purchases.

Nothing has been learned. The negotiations with Hamas should be resumed soon, but there are no signs that Israel plans to find the time. Far-reaching proposals to solve Gaza’s problems are a pipe dream. The “victor” will continue to push the “defeated” into a corner, leaving it in ruin and misery, which will lead to another round of violence sooner or later. And the world isn’t lifting a finger — either in the form of pressure on Israel (and Egypt) to stop the blockade, or for the urgent rebuilding of Gaza.

When the rockets return to Israel’s skies — and they will if the blockade isn’t lifted — Israel will again pretend to be surprised, offended and angry. How dare they! Then the planes will bomb and the big guns will fire shells — another inevitable round of fighting that will lead nowhere.

For such is Israel’s arrogance and complacency. There was a war, it was forced on us of course, and we won. Maybe there will be another one soon, though it also won’t be Israel’s fault, and Israel will win again. In the meantime, we have Ninet.