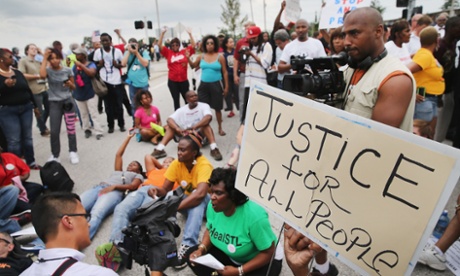 Darren Wilson testified on Tuesday for four hours about his August 9 shooting of the unarmed 18-year-old, reports say

The police officer who shot dead Michael Brown in the Missouri city of Ferguson last month, leading to nights of unrest, has reportedly testified to the grand jury that is considering potential criminal charges against him.

Darren Wilson testified on Tuesday for roughly four hours about his August 9 shooting of the unarmed 18-year-old, according to the St Louis Post-Dispatch.

The City of Ferguson police officer, 24, was “cooperative”, the newspaper reported, citing “a source with knowledge of the investigation” into Brown’s controversial death. It said that Wilson had also twice spoken to county investigators and once to federal authorities.

Ed Magee, a spokesman for Robert McCulloch, the St Louis County prosecuting attorney, who is overseeing the case, declined on Wednesday to confirm whether Wilson had testified. “We don’t make any comments on the grand jury,” said Magee.