Spokesman: No plan for Rouhani-Obama meeting in New York 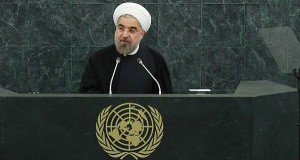 TEHRAN (Tasnim) – Iranian President Hassan Rouhani will travel to New York to attend the United Nations General Assembly, the government spokesman announced on Wednesday, adding that no plan has been made for a meeting between presidents of Iran and the US.

Speaking to reporters on the sidelines of the cabinet’s weekly session in Tehran, Mohammad Baqer Nobakht confirmed that President Rouhani will travel to New York to attend the 69th session of the UN General Assembly.

The spokesman, however, stressed that the president has not made any plan so far for a meeting with his US counterpart Barack Obama.

Nobakht added that details of President Rouhani’s UN trip will be unveiled later in a press conference.

It will be Rouhani’s second presence in the UN since taking office in August 2013.

What has focused further attention on Iran in this year’s UN General Assembly is the nuclear talks that Tehran will hold with six world powers on the sidelines of the event.

A fresh round of nuclear negotiations between Iran and the Group 5+1 (Russia, China, the US, Britain, France and Germany) will commence in New York on September 19.

The talks will kick off with a meeting between Foreign Minister Zarif and the outgoing European Union Foreign Policy Chief Catherine Ashton, who coordinates diplomacy with Iran on behalf of the six nations.