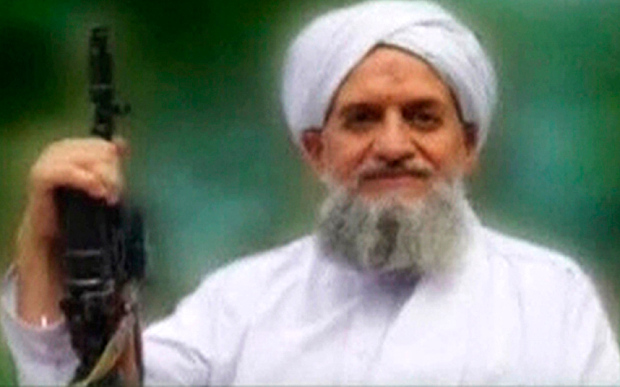 US officials believe al-Qaeda leader Ayman al-Zawahiri sent men to Syria to recruit Euopeans and Americans to his cause Photo: REUTERS

While ISIS is getting the most attention now, another band of extremists in Syria – a mix of hardened militants from Afghanistan, Yemen, Syria and Europe – poses a more direct and imminent threat to the United States, working with Yemeni bomb-makers to target U.S. aviation, American officials say.

At the center is a cell known as the Khorasan group, a cadre of veteran al-Qaeda fighters from Afghanistan and Pakistan who travelled to Syria to link up with the al-Qaeda affiliate there, the Nusra Front.

But the Khorasan militants did not go to Syria principally to fight the government of President Bashar Assad, U.S. officials say. Instead, they were sent by al-Qaeda leader Ayman al-Zawahiri to recruit Europeans and Americans whose passports allow them to board a U.S.-bound airliner with less scrutiny from security officials.

In addition, according to classified U.S. intelligence assessments, the Khorasan militants have been working with bomb-makers from al-Qaeda’s Yemen affiliate to test new ways to slip explosives past airport security.

The fear is that the Khorasan militants will provide these sophisticated explosives to their Western recruits who could sneak them onto U.S.-bound flights.

The Obama administration has said that ISIS, the target of more than 150 U.S. air strikes in recent weeks, does not pose an imminent threat to the continental U.S.. The Khorasan group, which has not been subject to American military action, is considered the more immediate threat.

Because of intelligence about the collaboration among the Khorasan group, al-Qaeda’s Yemeni bomb-makers and Western extremists, U.S. officials say, the Transportation Security Administration in July decided to ban uncharged mobile phones and laptops from flights to the U.S. that originated in Europe and the Middle East.

The Khorasan group’s plotting with al-Qaeda’s Yemen affiliate shows that, despite the damage that years of drone missile strikes has done to the leadership of core al-Qaeda in Pakistan, the movement still can threaten the West. It has been rejuvenated in the past year as al-Qaeda offshoots have grown in strength and numbers, bolstered by a flood of Western extremists to a new terrorist safe haven created by Syria’s civil war.

That Yemen affiliate, al-Qaeda in the Arabian Peninsula (AQAP), has been able to place three bombs on U.S.-bound airliners, though none has succeeded in downing the aircraft.

“The group’s repeated efforts to conceal explosive devices to destroy aircraft demonstrate its continued pursuit of high-profile attacks against the West, its increasing awareness of Western security procedures and its efforts to adapt to those procedures that we adopt,” Nicholas Rasmussen, deputy director of the National Counterterrorism Center, recently told a Senate panel.

James Clapper, the director of national intelligence, first disclosed during a Senate hearing in January that a group of core al-Qaeda militants from Afghanistan and Pakistan was plotting attacks against the West in Syria.

But the group’s name, Khorasan, or its links to al-Qaeda’s Yemen affiliate, which is considered the most dangerous terrorist threat to the U.S., have not previously been disclosed.

Khorasan refers to a province under the Islamic caliphate, or religious empire, of old that included parts of Afghanistan.

Many U.S. officials interviewed for this story would not be quoted by name talking about what they said was highly classified intelligence. Some congressmen who have been briefed on the Khorasan group threat were willing to discuss it in general terms. One, who declined to be identified in order to discuss intelligence matters, used the group’s name in conversations with a reporter.

The CIA refused to confirm the group’s name or any details in this story.

Rep. Adam Schiff, a member of the House Intelligence Committee, declined to name the group. But he described concerns among intelligence officials about “an unholy mix of people in Iraq and Syria right now – some who come from AQAP, some who come from Afghanistan and Pakistan, others from the Maghreb” in North Africa.

“They can combine in ways that could pose a greater threat than their individual pieces. And that’s something we worry about,” said Schiff.

U.S. officials have identified some members of the Khorasan group, but would not disclose the individuals’ names because of concerns they would hide from intelligence-gathering.

Intelligence officials have been deeply concerned about dozens of Americans and hundreds of Europeans who have gone to fight for various jihadist groups in Syria. Some of those Westerners’ identities are unknown and therefore they are less likely to draw the attention of intelligence officials when they purchase tickets and board a crowded jetliner heading for European and American cities.

AQAP’s master bomb-maker, Ibrahim al-Asiri, is believed to have built the underwear bomb that a Nigerian man, Umar Farouk Abdulmutallab, tried to detonate on a passenger jet over Detroit in December 2009.

Al-Asiri is also believed to have built two bombs hidden in printer cartridges placed on U.S.-bound cargo jets in 2010, and a body bomb that was acquired in a 2012 operation involving Saudi, British, and U.S. intelligence agencies.

U.S. intelligence suggests al-Asiri and his confederates are constantly trying to tweak their bomb designs so that the explosives can get past airport security and also detonate successfully.

The TSA ban on uncharged laptops and cellphones stemmed from information that al-Qaeda was working with the Khorasan group to pack those devices with hard-to-detect explosives, a U.S. official said.