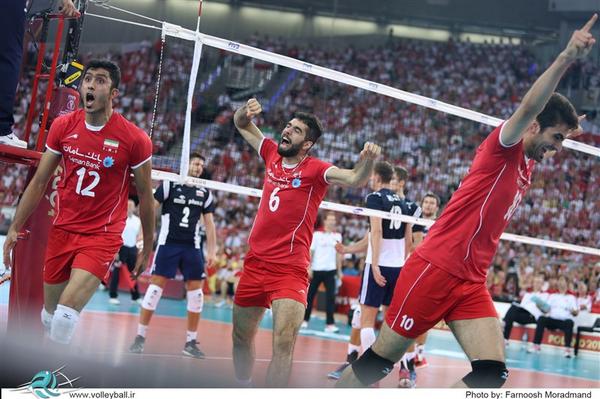 TEHRAN (FNA)- Iran staged another stunning performance in the FIVB 2014 Volleyball Men’s World Championship in Poland and thrashed Serbia 3-1 on Sunday evening to qualify for the third round of the tournament.

The Asian champions showed excellent consistency throughout today’s match, and overpowered Serbia in a four setter (27-25, 22-25, 25-22 and 25-18) to keep their hopes high for winning a spot in the third round of the tournament.

And they did, when the US lost their match against Argentina 3-2 and with it the ticket to the next round.

Now Iran have 15 points, and stand at the second spot of Pool E for the time being. France kept their spot in Pool E with 16 points from their six games (and before their tonight match) and are followed by Poland (14 points who should play their last round two match against the French), the US (14 points), Serbia (9 points), Argentina (8 points), Italy (2 points) and Australia (0). The last two still have their last round two match to play tonight.

In the last matches of this Group, Host Poland will face France and Italy will play Australia tonight.