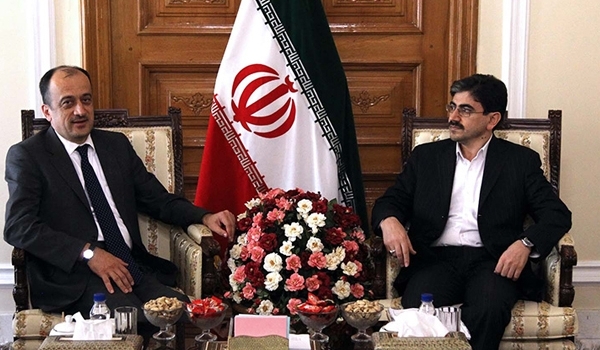 TEHRAN (FNA)- Head of Iran-Turkey Parliamentary Friendship Group Moayyed Hosseini Sadr in a meeting with Turkish Ambassador to Tehran Umit Yardim underlined the importance of consultations and meetings between Tehran and Ankara in preventing the spread of terrorism in the region.

“Sympathy and continued consultations between the political and parliamentary officials (of Iran and Turkey) can help to the establishment of peace and stability and prevent the spread of activities of extremist and terrorist groups in the region,” Hosseini Sadr said during the meeting in Tehran.

He also referred to Iran and Turkey’s historical and cultural commonalities, and said, “The deep historical commonalities and bonds and common interests have created a proper ground for consolidation and strengthening of friendly ties in the political, economic and cultural fields, specially in the relations between the Iranian and Turkish parliaments.”

Yardim, for his part, described Iran and Turkey as two influential countries in the region, and said, “There are abundant capacities in different political, economic and industrial areas in Turkey and Iran which should come into use through continued consultations between the two countries’ political and parliamentary officials.”

Also President Rouhani and Turkish President-elect Recep Tayyip Erdogan in a phone talk in August pledged to do their best to explore news avenues for expanding all-out ties, and underlined the need for both Tehran and Ankara to have closer cooperation over settlement of regional disputes.

“I hope Iran and Turkey would experience closer and friendlier ties and expand their cooperation for settlement of regional crisis,” President Rouhani said.

The Iranian president stressed the need for both countries to boost cooperation in settlement of disputes in Iraq, Syria and Palestine, and said, “Combating terrorism in the region, specially Iraq is one of the necessities for cooperation between the two countries.”

President Rouhani voiced his concern over the ongoing bloodshed in Iraq, and said, “A legal government must be formed in that country as soon as possible.”

Erdogan, for his part, called for enhanced relations with Tehran, and voiced his country’s enthusiasm for coordinating efforts over ending bloodshed in Iraq, Syria, and Gaza.