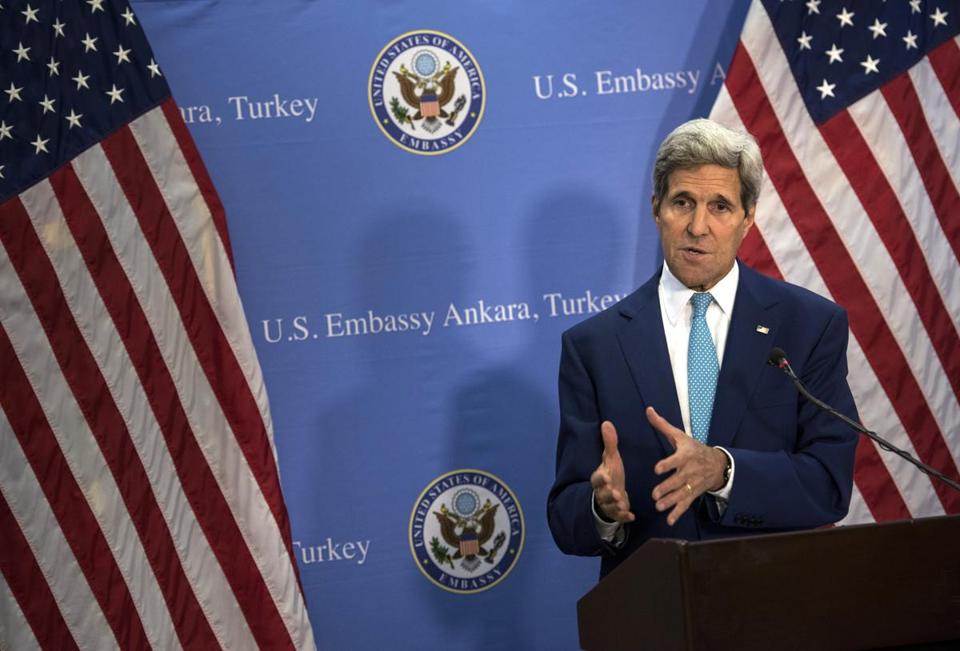 ANKARA, Turkey — Secretary of State John Kerry said Friday that “it would not be appropriate” for Iran to attend an international conference on the security crisis in Iraq that is to be held in Paris next week because of what he called the role that Iran’s paramilitary Quds Force is playing in the fighting in neighboring Syria.

France is the host of the Monday meeting, which is to coordinate aid to the new Iraqi government for its fight against the Islamic State militant group. French officials have left open the possibility that Iran might attend.

But during a visit here to consult with Turkish officials on the international effort against the Islamic State, Kerry said that he opposed including Iran.

“Under the circumstances, at this moment in time, it would not be right for any number of reasons,” said Kerry, who noted that the French had not consulted with him on the question.

“Iran has been deeply involved with its forces on the ground in Syria,” Kerry said. He also called Iran a “state sponsor of terror in various places.”

In recent weeks, speculation has risen that the fight against the Islamic State might present an opportunity for the United States and Iran to make common cause against a mutual foe and, thus, improve relations. But such a prospect also has raised speculation that the Obama administration’s fight against the Islamic State might distract US officials from their effort to negotiate a deal limiting Iran’s nuclear program.

In his remarks, Kerry indicated that the administration had opted for a dual-track approach. The United States, he said, would continue to carry out what he called a “deep and serious conversation” with Iranian officials on a possible agreement that would lift economic sanctions in return for serious constraints on Iran’s nuclear program.

At the same time, Kerry has said, the United States does not plan to coordinate with Iran in the fight against the militant group in Iraq.

And while the White House has authorized the deputy secretary of state, William J. Burns, to discuss regional issues with Iranian officials on the margins of the nuclear talks, Kerry suggested that Iran needed to curtail its military activities in Syria before a fuller discussion of the situation in Iraq and Syria might be possible.

“IRGC forces are on the ground,” Kerry said, using the acronym for the Islamic Revolutionary Guards Corps, which the United States says is present in Syria.

“These are serious issues, and that’s why they need to be approached in a proper way,” Kerry said. “Not at a conference like this at this moment, but through a process which we are entirely prepared over a period of time to engage in.”

Kerry successfully opposed a United Nations move this year to invite Iran to a peace conference on Syria in Geneva. Western diplomats asserted at the time that if Iran were given a prominent role at that conference, the moderate Syrian opposition and some Sunni Arab states might not attend.

During his visit, Kerry pledged $500 million in new aid for Syrian refugees and civilians displaced within the country. The gift brings the total amount of US humanitarian assistance since the start of the conflict in March 2011 to nearly $3 billion.

Kerry met here with President Recep Tayyip Erdogan of Turkey and other senior Turkish officials on his effort to mobilize a broad international coalition against the Islamic State.

The Islamic State is holding 49 Turkish government employees and members of their families in Iraq. And Turkey has been taking a low profile in the efforts to coordinate an international response to the Islamic State.