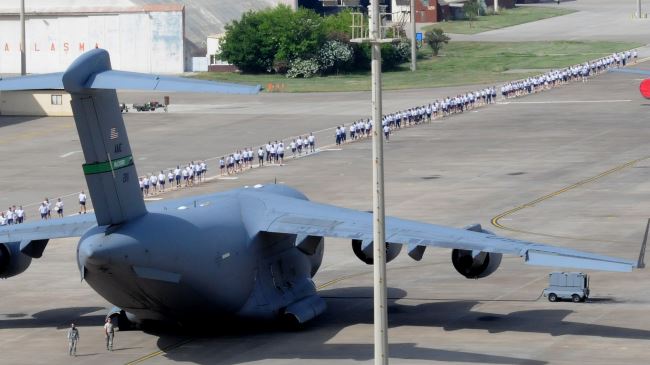 Turkey won’t allow US to use its bases against ISIL: Official

Turkish government says it will not allow a US-led military coalition to use its air bases in order to launch attacks on ISIL terrorists’ hideouts in neighboring Iraq and Syria.

A government official said Ankara can open the Incirlik Air Base in the south, only for logistical and humanitarian operations, and not for any airstrikes.

“Turkey will not be involved in any armed operation but will entirely concentrate on humanitarian operations,” media outlets quoted the official as saying.

Turkey is reluctant to take a stronger role in the coalition against ISIL militants in fear of aggravating a hostage situation.

ISIL militants have held hostage 49 Turkish nationals, including diplomats and children, since June.  They were abducted from the Turkish consulate in Mosul.

“Our hands and arms are tied because of the hostages,” the official noted.

Back in 2003, Turkey refused to let Washington put US boots in the country to invade Iraq from the north. This triggered a crisis between the two allies at the time.

The latest developments come as American and European opponents of the Syrian government voice concern given that militants appear to be biting the hand that feeds them.

The brutal beheadings of American journalists by ISIL are the latest and most shocking example of foreign militants threatening western interests.

This is while the United States has been actively funding and training the militants to fight the Syrian government.

The foreign-backed ISIL violence has spilled over to neighboring Iraq.

The West and its regional allies including Qatar, Saudi Arabia, and Turkey are giving financial and military support to the militants.