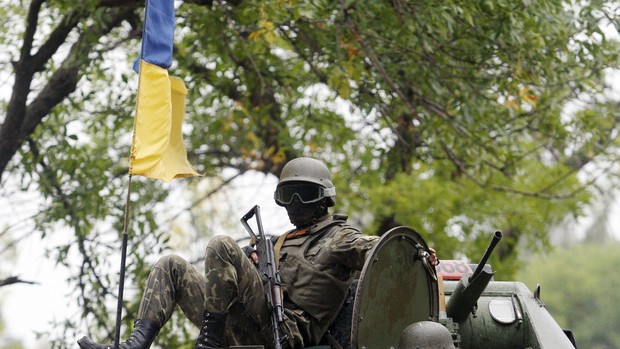 European Union nations are struggling to agree on a trigger to expand sanctions against Russia over its encroachment in Ukraine as a cease-fire and troop withdrawal bolster the case for holding off.

EU ambassadors are holding a second day of talks in Brussels after failing to reach consensus yesterday. The bloc put a second package of economic penalties on hold on Sept. 8 for at least a “few days” to assess the viability of the truce without risking further trade retaliation by Russia.

“Some countries are asking more time,” Italian Foreign Minister Federica Mogherini, the EU’s next foreign-policy chief, told a conference in Brussels yesterday. “The cease-fire is basically holding. We expect further steps to be implemented on the positive side in the coming days or hours.”

With the EU and the U.S. threatening to impose their toughest measures yet against President Vladimir Putin, his Ukrainian counterpart Petro Poroshenko said Russia is beginning to withdraw troops from the conflict zones near their border.

“According to the latest information from our intelligence unit, 70 percent of Russia’s troops have been recalled across the border,” Poroshenko said yesterday in Kiev. “This gives more hope the peace initiatives have good prospects.”

Separatist rebels also released 26 captives from their enclaves in the eastern Ukrainian towns of Horlivka and Donetsk, he said on his Twitter account.

The truce, broken sporadically by shelling from either side, has helped markets rally. The yield on Ukrainian bonds maturing in July 2017 fell 4 basis points, or 0.04 percentage point, to 12.57 percent at 11:21 a.m. in Kiev after falling 32 basis points yesterday. The hryvnia was 0.4 percent stronger to 12.9517 to the dollar.

The planned sanctions, originally due to be published in the EU’s Official Journal on Sept, 9, include barring some Russian state-owned defense and energy companies from raising capital in the EU, according to a European official. The U.S. and EU are also poised to halt billions of dollars in oil exploration by prohibiting cooperation in Russia’s Arctic, deep seas or shale formations, according to three U.S. officials.

Putin denies any involvement by his government in the Ukrainian conflict. The fighting that broke out between pro-Russian separatists and government troops after Putin annexed Crimea in March has killed more than 3,000 people and displaced more than 1 million, souring ties between Russia and its former Cold War foes. Amnesty International said both sides have committed war crimes.

Putin has tried to put the blame for the diplomatic confrontation on the U.S. and its allies, saying yesterday that the North Atlantic Treaty Organization posed a threat to Russia by building up its forces in eastern Europe. Russia must confront “potential threats to the military security” of the country, Putin said, adding that Russia’s main security task is keeping its nuclear deterrent.

“The U.S. sees Ukraine as an arena for geopolitical battles, almost as if for the future of the world,” Russian Foreign Minister Sergei Lavrov said in an interview to Itar-Tass published on ministry’s website today.

EU sanctions decisions require the support of all EU governments, giving any one nation leverage to seek concessions. Several European leaders including Hungary’s Viktor Orban have expressed concerns that further penalties against Russia will hurt their own economies.

German Chancellor Angela Merkel told parliament in Berlin that she backs additional sanctions, while noting that the new penalties could be lifted if the peace plan holds.

In July, the EU barred five state-owned Russian banks from selling shares or bonds in Europe. It also restricted the export of equipment to modernize the oil industry, prohibited new contracts to sell arms to Russia, and banned the export of machinery, electronics and other civilian products with military uses — so-called dual-use goods — to military users.

Russia responded by banning imports of some EU farm goods, a step that has cut off about 5 billion euros ($6.5 billion) of annual trade and left the bloc struggling to aid its producers. Russia has signaled it will retaliate further if extra penalties are enacted.

Any delay in imposing more penalties expands Russia’s “ability to maneuver,” said Joerg Forbrig, senior program officer for central and eastern Europe at the Berlin bureau of the German Marshall Fund of the U.S.

“The Russians don’t have one scenario,” Forbrig said by phone. “A frozen conflict is one option. Expanding rebel territory is another. It all depends on what the West does.”

As Europe debated, Russian gas exporter OAO Gazprom (OGZD) curbed supplies to Poland, a member of both NATO and the EU, to prevent it from supplying Ukraine via so-called reverse flows. Gazprom halted sales directly to Ukraine in June.

Yesterday, there was sporadic fighting around the Donetsk airport, according to military spokesman Andriy Lysenko, and the border guard service said three of its personnel were killed by an explosive device in the Luhansk region.

Poroshenko indicated he’s willing to grant more autonomy to some eastern regions, where Russian is the main language. He said a draft law on “temporary self-governance in certain districts of Luhansk and Donetsk” will be submitted to parliament next week, while both regions will remain in Ukraine.