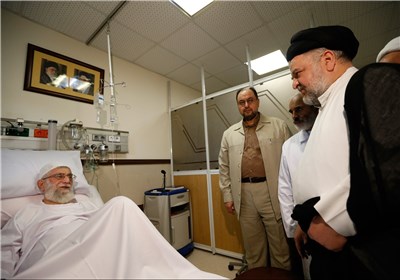 The envoy, Hojatoleslam Shahrestani, visited the Leader on Tuesday at a state hospital in Tehran and conveyed Ayatollah Sistani’s greeting to Imam Khamenei.

On Monday morning, the Supreme Leader underwent a surgery for prostate problem, which was performed successfully.

A whole host of high-ranking Iranian officials have visited Ayatollah Khamenei at the hospital over the past days.

Foreign officials have also either visited the leader or spoken to him by telephone after the surgery.

In a message on Monday, Kuwaiti Emir Sheikh Sabah al-Ahmad al-Jaber al-Sabah expressed his sincere wishes that the Leader would go through a quick recovery process and get well soon.

On Tuesday, Head of the Islamic Supreme Council of Iraq Ammar al-Hakim also visited the Leader at the hospital.

On the telegraph, Erdogan expressed his satisfaction over the successful surgery, according to Anadolu Agency.