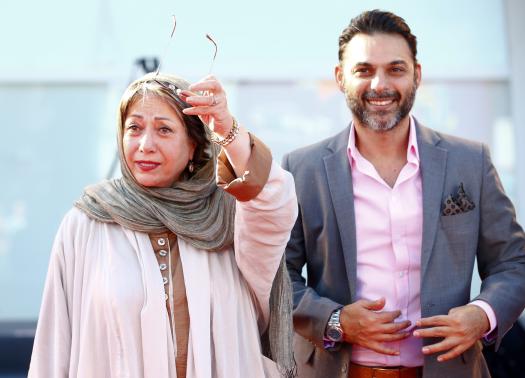 (Reuters) – Two years ago, Iranian filmmaker Rakhshan Bani-Etemad knew she had no chance of showing a feature film in Iran about the depredations of unemployment, drug abuse and wife-beating, so she made a series of shorts instead.

The fact that she has now stitched them into a full-length movie in the running for top prize at the Venice Film Festival shows that Iran’s new leadership can take a broader view, she says.

“It’s true that the questions we are dealing with are Iranian, but they are also global,” she told Reuters in an interview in Venice, where her film received excellent reviews.

With the Middle East high on the world list of trouble spots, Bani-Etemad hopes that wider circulation for “Ghesseha” (Tales) will help people inside and outside the region to understand one another better.

“It’s set in Iran, it was made in Iran, the characters are Iranian. But these are problems that exist throughout the world and I see them in my society. ”

The picture she paints of life in Tehran is anything but flattering.

Using the device of a documentary filmmaker visiting the city to record vignettes about everyday life, she shows such scenes as a shelter for battered wives where a drug-addled husband, who has disfigured his wife by pouring boiling water on her face, pleads with her to return.

In another strand, a functionary will not listen to an elderly former civil servant’s plea to recoup crippling medical costs because the bureaucrat is more interested in taking a call from his mistress.

A unifying figure in the film is Abbas, played by Mohammadreza Forootan, who drives a taxi because he has been expelled from university for his political views.

His mother Tooba, played by Golab Adineh, is trying to get the nine months’ pay she is owed by the owners of a factory who closed it down without paying the workers and sold it to a property developer.

Portraying the mean and corrupt sides of life in Tehran did not endear Bani-Etemad to the government of former hardline president Mahmoud Ahmadinejad, and she shot a series of shorts because she was unwilling to make the compromises needed to get approval for a feature-length film.

After last year’s election of Hassan Rouhani as president, she was able to string the pieces into the present film, which still plays mostly like a series of shorts about characters whose lives intersect.

“It has been given a screening license to be shown in Iran and hopefully in the next few months it will be screened,” she said. “With the changes that have occurred in Iran, this has been a pivotal reason why I was given permission to show the film.”