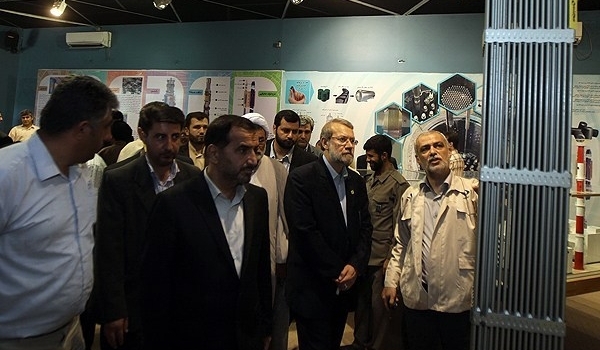 TEHRAN (FNA)- Iran’s first nuclear power plant in the Southern city of Bushehr is operating at maximum capacity and has generated 7.5bkw/h of power so far, the operator of the plant said.

Speaking during a visit to the plant by Iranian Parliament Speaker Ali Larijani on Wednesday, Mahmoud Jafari said operation of the power plant “saves the country the consumption of 8.5 million barrels of oil annually”.

He further blasted the western animosities towards Iran’s civilian nuclear activities, and said, “Although the Bushehr nuclear power plant was exempt from the sanctions, the westerners prevented the supply of the equipment (needed by the power generation facility) to Iran.”

Iran signed a deal with the Germans to build the facility, but Berlin did not comply with the agreement following the victory of the Islamic Revolution in Iran in 1979. The Germans did not return the huge sums that they had received from the former Pahlavi regime for the construction of the power plant either.

Then the Islamic Republic signed the Bushehr contract with Russia in 1995 and the nuclear power plant reached its full capacity by August 2012. It is located about 18 kilometers South of the provincial capital.

The Bushehr nuclear power plant adds 1,000 megawatts of electricity to the national grid when operating at full capacity.

Head of the Atomic Energy Organization of Iran (AEOI) Ali Akbar Salehi announced late in August that Tehran would sign a contract with Russia in the near future to build two new nuclear power plants in the Southern province of Bushehr.

“At present the AEOI deputy chief is negotiating in Moscow and the contract between Iran and Russia for building new power plants will be inked before the meeting between Mr. (Vladimir) Putin (the Russian president) and Mr. (Hassan) Rouhani (the Iranian president) which will be held within the next one month,” Salehi said on the sidelines of a ceremony to inaugurate Bushehr nuclear power plant’s desalination unit on August 30.

He said that Iranian Foreign Minister Mohammad Javad Zarif was also pursuing the negotiations in Moscow on the same day.

“We consider Russia a highly important neighbor and we hope that based on the words of the Supreme Leader of the Islamic Revolution (Ayatollah Seyed Ali Khamenei), powerful Russia beside independent Iran can be important allies for each other,” Salehi said.

In earlier remarks in June, AEOI Spokesman Behrouz Kamalvandi had announced that the two power plants to be built by Russia would be built beside the country’s current nuclear power plant in Bushehr, Southern Iran.

On January 16, Zarif said he had exchanged views with senior Russian officials on the construction of new nuclear power plants in Iran during his visit to Moscow.