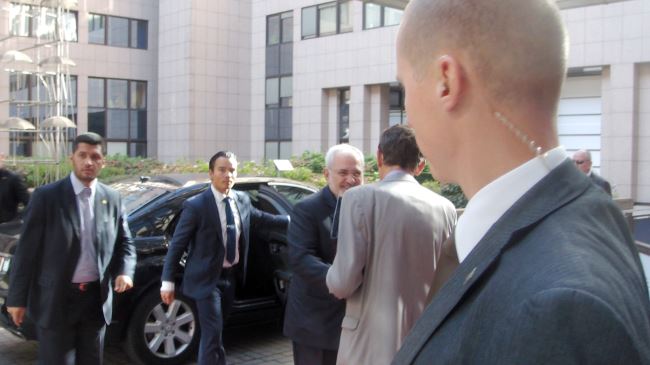 Iran’s Foreign Minister Mohammad Javad Zarif says he is optimistic that the issues related to the country’s nuclear energy program “can be resolved in time.”

“I am quite optimistic after discussions with Lady Ashton that we can in fact resolve this issue in time,” Zarif told reporters after a meeting with chief negotiator of the Sextet of world powers Catherine Ashton in the Belgian capital Brussels on Monday.

“I hope with the readiness and political will that I see in all parties to this discussion to have a resolution within the next three months,” Zarif added.

During the meeting, the two sides discussed how to proceed with the Iran-P5+1 talks with a view to reaching a comprehensive agreement.

The Iranian foreign minister will next head to Italy and Luxemburg. Zarif plans to meet with incoming European Union foreign policy chief Federica Mogherini, who will replace Ashton.

Iran and the Sextet of powers – the US, France, Britain, Russia, China and Germany – signed a historic interim deal in the Swiss city of Geneva in November 2013. The agreement entered into force on January 20 and expired six months later. In July, Iran and the six countries agreed to extend their negotiations until November 24 in a bid to work out a final accord.