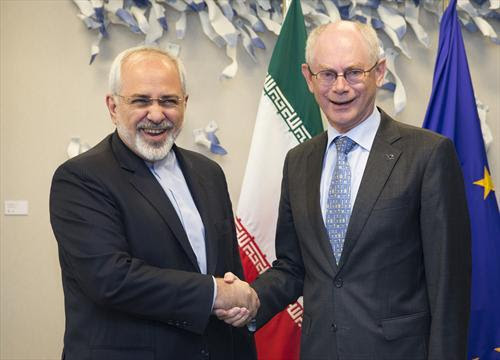 TEHRAN (Tasnim) – Iran’s foreign minister reiterated that an ultimate accord on Tehran’s peaceful nuclear program is within reach, provided that the negotiating parties stick to their previous commitments.

Mohammad Javad Zarif on Monday emphasized that the whole parties engaged in nuclear talks with Iran should honor their commitments in the previous agreements with sensitivity and should “prevent complication and alteration in the achieved agreements.”

He made the comments in a meeting with outgoing European Council President Herman Van Rompuy, in the Belgian capital of Brussels on Monday.

The European official, for his part, expressed the European countries’ determination to help hammer out a final, comprehensive deal on Iran’s nuclear case.

Representatives from Iran and the Group 5+1 (Russia, China, the US, Britain, France and Germany) are expected to hold a gathering on the sidelines of the upcoming session of the United Nations General Assembly in New York for talks on Tehran’s nuclear program.

On July 18, after more than two weeks of intensive diplomatic negotiations in Vienna, the two sides agreed to continue talks for another four months.

The parties decided to extend the nuclear talks until November 24 in the hope of clinching a final deal. The four-month extension of the talks began on July 21.