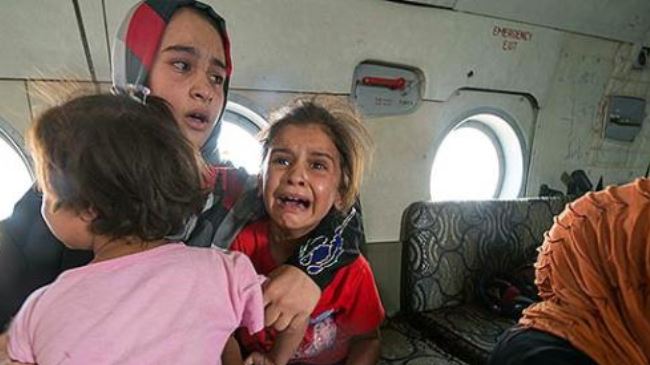 A woman and children are seen in a military helicopter after being evacuated by Iraqi forces from the Turkmen town Amirli, north of Baghdad, on August 29.

Iraqi forces backed by thousands of volunteers have broken the siege on the town of Amerli, where thousands of civilians have been trapped by the ISIL terrorists.

Iraqi army sources say troops entered the besieged town on Sunday. Thousands of Kurdish Peshmerga forces also took part in the operation on Saturday to lift the ISIL-imposed blockade of the town.

Iraqi planes have been targeting the Takfiris’ positions since the forces started mobilizing against the Takfiris there.

The residents of the town are facing a shortage of food and water and the humanitarian condition has been described as dire.

UN had earlier warned that Shia Turkmen residents of the volatile town who are besieged by the ISIL Takfiri terrorists could be massacred if urgent action was not taken to rescue them.

The residents of this small community about 180 km (110 miles) north of Baghdad have been living under the ISIL siege for more than two months.

The Iraqi troops including the army and popular forces have inflicted heavy losses on the ISIL Takfiri militants who occupied some swathes of land earlier this summer. The army has regained control of some regions in recent days.

ISIL terrorists have threatened all communities, including Shias, Sunnis, Kurds, Christians, Izadi Kurds and others, as they continue their advances in Iraq.

Senior Iraqi officials have blamed Saudi Arabia, Qatar and some Persian Gulf Arab states for the growing terrorism in their country.