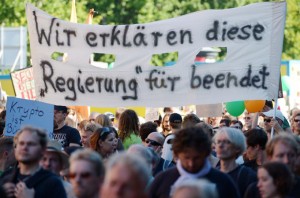 Nasim– Thousands of people of Germany came to the streets in Berlin to protest the government’s surveillance and data collection programs.

According to protest organizers, about 6,500 people participated in the demonstration, calling for stricter control on German intelligence agencies.

“The disclosures of the last months showed the whole world that the right to privacy is being dramatically eroded,” he said.