ISIL grows into cancerous tumor for US: Iran general 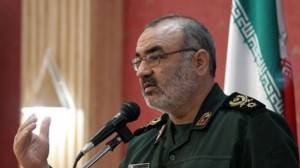 A senior Iranian military commander says the Takfiri ISIL militants have grown into a cancerous tumor for the US government which financed and armed the terrorist cult.

“Now you see that a self-created phenomenon; namely the ISIL, has turned into a cancerous tumor for the Americans,” the Islamic Revolution Guards Corps’ (IRGC) second-in-command, Brigadier General Hossein Salami, said on Wednesday.

He noted that ISIL is now threatening the US national security, adding, “One day, they (the Americans) supported the ISIL [in its war] against Syria, and now, they are forced to confront the ISIL due to their erroneous strategy.”

The general said the US government turned its focus on Iraq after failing to realize its objectives in Syria by arming Takfiri militants.

On August 26, two US senators urged US President Barack Obama to cut off the ISIL terrorist group’s massive financing.

In a letter Tuesday to Secretary of State John Kerry, Marco Rubio and Bob Casey described the ISIL as the “best-funded terrorist group” which enjoys “resources, weaponry, and operational safe havens to continue to threaten the stability of the region and US national security interests.”

The Obama administration categorized the ISIL as “enemy number one” for the United States after the terrorist group beheaded an American journalist James Foley in Syria.

Earlier this month, the US ordered airstrikes against ISIL hideouts in Iraq.

The ISIL terrorists have threatened various communities, including Shias, Sunnis, Kurds, Christians and Izadi Kurds, during their advances in Iraq.

The terrorist group has links with Saudi intelligence and is believed to be supported by the Israeli regime.