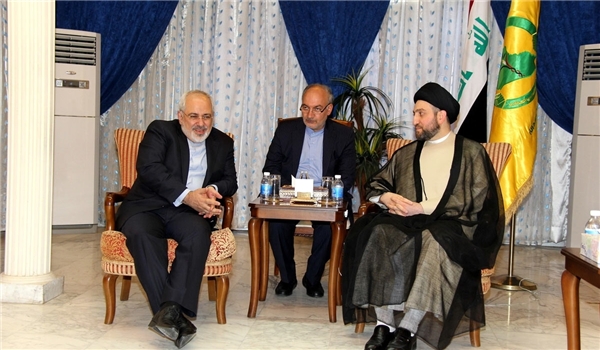 TEHRAN (FNA)- Iranian Foreign Minister Mohammad Javad Zarif voiced concern over the spread of terrorism in the region, particularly in Iraq, and called on the Iraqi people from all walks of life to grow more united against the new wave of violence in the Muslim country.

Speaking in a meeting with leader of Supreme Islamic Council of Iraq Ammar al-Hakim on Sunday, Zarif underscored that Iranian people have always stood by the Iraqi people and government.

“Of course, we are confident that people of the country, including Sunnis, Shiites, Kurds, Ezadis, and Christians can fight terrorism,” said Zarif, adding that menace of terrorism is not just confined to a special group.

“Victims of the calamity are among Shiites, Sunnis and Kurds. So, all should help Iraq come out successful in campaign against the phenomenon,” the top Iranian diplomat said.

Zarif arrived in Baghdad on Sunday, for talks with top Iraqi officials.

Bilateral relations, international developments and the ongoing turmoil in Iraq are on the agenda of talks between the two sides.