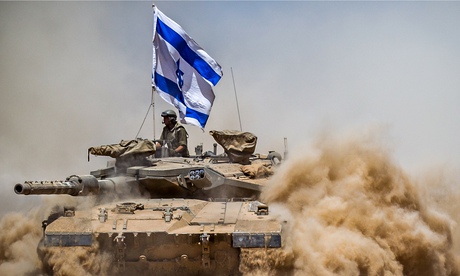 The Palestine problem will remain unsolved while the killing continues

‘Force will not solve the problem; only politics, diplomacy and compromise can do that.’ Photograph: Xinhua / Landov / Barcroft Media

None of the big players in Gaza know what change looks like, but it won’t happen by force. The status quo is not an option

The current war in Gaza between Israel and Hamas is the third in six years. The Palestine issue is separate from the problems in Iraq and Syria, which are making the headlines today, but it continues to spread its poison.

Israel wants demilitarisation of Gaza; Hamas wants the blockade ended. Neither objective is realistic. There is no effective mediator. Both the Americans and the Egyptians regard Hamas as terrorists. America arms Israel and Egypt collaborates with Israel in imposing the blockade. It’s a wonder anybody talks to anybody. The Palestinians have approached the Swiss to mediate, but the Swiss don’t seem keen. Meanwhile, neither Israel nor Hamas is gaining anything by fighting. Eventually a ceasefire will stick and the war will peter out.

European foreign ministers have declared that the status quo in Gaza is not an option. That implies change. What change? Internally we see very little. Most Israelis have no contact with – and have little thought for – the Palestinians in the West Bank, let alone Gaza. That would change if there were another uprising, another intifada – people in Israel would get killed. It has already changed a bit as rocket attacks from Gaza have increased in range, though not in military effectiveness. So far the psychological effect has been to unite almost all Israelis behind the war, but long term, with the possibility of more accurate rockets, things might be different.