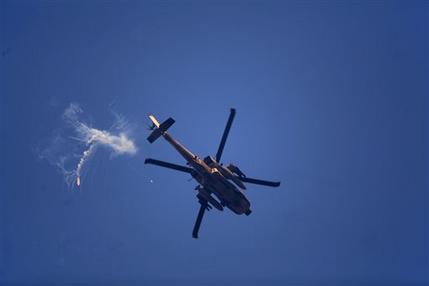 FILE – In this July 20, 2014 file photo, an Israeli attack helicopter shoots flares near the Israel and Gaza border. When Israel completes its damage assessment from its latest war with Hamas, it may conclude that one of the biggest casualties was its all-important relationship with the United States. (AP Photo/Dusan Vranic, File)

JERUSALEM (AP) — When Israel completes its damage assessment from its latest war with Hamas, it may conclude that one of the biggest casualties was its all-important relationship with the United States.

A recent American decision to hold back on the delivery of advanced Hellfire missiles offered dramatic manifestation of a relationship that appears to be deteriorating in large part due to strained ties between President Barack Obama and Prime Minister Benjamin Netanyahu.

Since both came into power in early 2009, they have been unable to see eye-to-eye on a host of issues – most notably on how to handle Iran’s nuclear program and on peace talks with the Palestinians. There also seems to be little personal chemistry. Topping things off are mutual accusations of political meddling in each other’s countries.

During the war in Gaza, the United States publicly backed Israel’s right to defend itself against rocket fire, yet Israel felt the support was tepid. Several times the administration criticized mounting civilian casualties in Gaza. Israel shunned American mediation, preferring to work with Egypt. And top officials even launched personal attacks on Secretary of State John Kerry when he tried to mediate a cease-fire, accusing him of offering too much to Hamas.

U.S.-Israeli relations have seen their ups and downs, but what makes this time remarkable is the wide gap between how each leader sees the world, said Shmuel Rosner, an Israeli columnist who focuses on the relationship. “Six years of mutual suspicions have left deep scars and I don’t see it improving over the next two,” he said.

From the perspective of critics in Israel, Obama remains a naive idealist who doesn’t grasp the harsh Mideast realities and lacks the emotional connection to Israel that some of his predecessors had. Although Obama has been careful in public statements, few in Israel doubt that he would prefer a more liberal Israeli counterpart.

For his part, Netanyahu has been suspected of meddling in U.S. politics due to his strong ties to the Republican party and conservative billionaire Sheldon Adelson. Netanyahu’s warm embrace of Mitt Romney before the 2012 election irked the Democratic administration – as did his appointment of Ron Dermer, a former Republican activist, as Israel’s ambassador the United States.

“The problem is that Netanyahu has become a domestic political enemy of the president and his party,” leading Israeli commentator Nahum Barnea wrote Monday in Yediot Ahronot. “That is a blunder of historic proportions.”

Despite this, Obama has been a steadfast backer of Israel’s defense needs and has overseen years of strong security cooperation. The pinnacle was U.S. funding for the Israeli-developed Iron Dome defense system, which proved to be a game-changer in the latest war by shooting down hundreds of incoming rockets.

That’s why Israeli officials were shocked when a routine request for more armaments was rejected during the war. The Wall Street Journal reported that the White House and State Department intervened after learning that Israel asked for the transfer of the Hellfire weapons directly from the Pentagon without seeking their approval.

Israeli military officials said Israel has ample armaments and the U.S. move did not affect the outcome of the war. But they interpreted the maneuver as a warning from Washington that Israel had overplayed its hand and was being punished for perceived disrespect. The officials spoke on condition of anonymity because they were not allowed to discuss defense matters with the media.

U.S. State Department spokeswoman Marie Harf said there has been no change in policy, just “additional care to look at arms as we’re providing them.”

Netanyahu and Obama got off to a rough start from their first meeting in the White House, when they appeared ill at ease with one another.

Obama and others officially blamed both sides for the collapse of Israeli-Palestinians peace talks early this year but privately senior U.S. officials complained about leaks from members of Netanyahu’s cabinet or their surrogates that they said appeared intended to sabotage the talks.

Most recently, U.S. officials were furious when Netanyahu’s Cabinet voted down a draft cease-fire document that Kerry had submitted for comment only. Once a cease-fire was finally arranged, Israel accused Hamas of violating it, prompting Netanyahu to tell U.S. Ambassador to Israel Dan Shapiro in an angry Aug. 1 phone call to “never second guess me again” on Hamas, according to people familiar with the conversation.

Neither the U.S nor Israel denied the account outright.

Tensions rose further after an Israeli attack near a U.N. school in Gaza on Aug. 3. In unusually harsh criticism, the State Department said the U.S. was “appalled by” the “disgraceful shelling” of a U.N. facility.

Martin Indyk, a former U.S. ambassador to Israel who was the chief U.S. negotiator between Israel and the Palestinians in the recent round of talks, said Israel could suffer if it undercuts the perception that the U.S. still wields strong influence. “If they undermine our ability to influence their adversaries, or (the) belief of their adversaries in our ability to influence them, then they’re going to face a much more difficult situation,” he said.