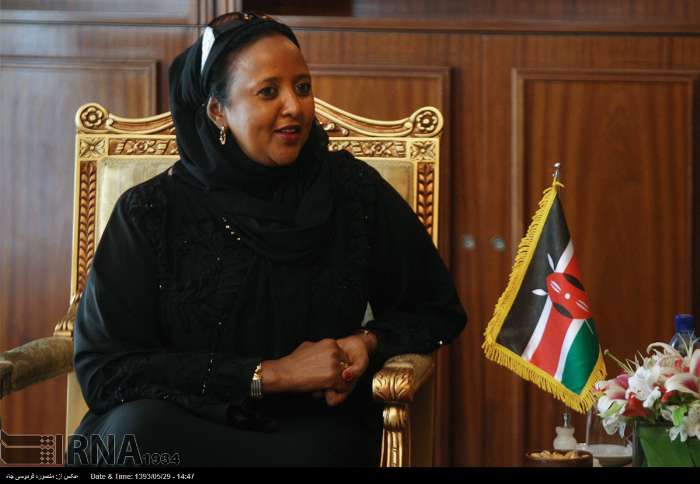 “Kenya supports Iran’s inalienable right in the international community to have access to the peaceful nuclear energy,” Mohamed said, addressing the closing ceremony of the Joint Economic Cooperation Commission in Tehran on Tuesday night.

Elsewhere, she stressed that Kenya attaches much importance to its relations with Iran, and added, “We appreciate your achievements.”

Mohamed referred to the close trade relations between the two countries, and said, “We seek to increase the volume of imports from Iran and develop our exports and presence in the Iranian markets.”

She called on the Iranian capital holders to invest in her country given Kenya’s high security.

In June, Iran’s Vice-President and Head of the Department of Environment Masoumeh Ebtekar and Kenyan President Uhuru Kenyatta in a meeting in Nairobi underlined the need for the further expansion of mutual cooperation.

During the meeting in the Kenyan capital, Ebtekar and Kenyatta explored avenues for bolstering and reinvigorating bilateral ties.

Ebtekar pointed to the status quo of Iran-Kenya relations, and said, “Iran and Kenya should broaden their relations in ecotourism, wild life management and protected zones.”

The Kenyan president, for his part, pointed to the importance of the two countries’ relations, and said, “The two countries should deepen their cooperation in different areas.”

President Kenyatta also said he is much willing to meet his Iranian counterpart Hassan Rouhani in the near future.